In the main event of UFC 282 in Las Vegas, Blachowicz competed against Ankalaev for the vacant light-heavyweight championship.

The 30-year-old champion Jiri Prochazka was forced to give up the title after suffering a shoulder injury that was anticipated to keep him out for six months to a year.

After their contentious tie, Jan Blachowicz kindly asked the referee to award Magomed Ankalaev the UFC championship. The match between Blachowicz and Ankalev resulted in a split draw.

Ankalaev was distraught in his octagon interview, and even Blachowicz said the outcome was incorrect.

“I don’t know what to say, I won that fight. I can’t choose the judges, where is my belt, I won this belt. t does not matter that I felt pain in my legs, I did what was needed to get this victory. I always do what I have to do to adjust, I can do it all.”

It doesn't get more wholesome than Blachowicz pic.twitter.com/LhGUA2PgyO

Then Blachowicz approached his adversary and told: “Give the belt to Ankalaev.”

However, UFC president Dana White was unimpressed with the bout for the vacant belt. Additionally, he declared that Jamahal Hill will now face former champion Glover Teixeira for the title.

Ankalaev was rendered to tears afterwards.

His social media team (presumably manager Ali Abdelaziz) tried to walk back his statement in the cage with two tweets in which Ankalaev thanks UFC and White for a chance at the title. 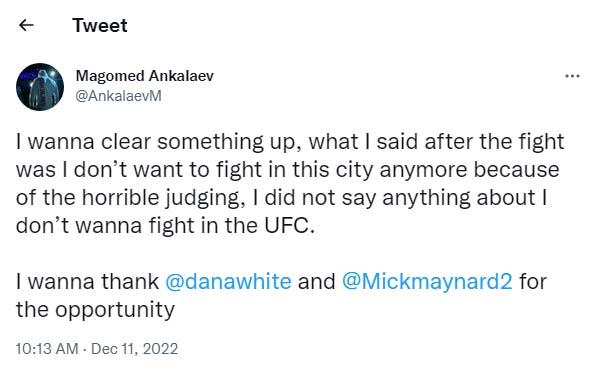