Sydney bodybuilder Hossein “Yakiboy” Balapour has been arrested after a peculiar incident was caught on camera earlier last week.

In the wild video, conversation goes south and gets physical when Balapour shoves Yacoub to the ground and starts to throw punches.

At one point Balapour pulls an item out of his pocket and hits Yacoub with it.

The pair are seemingly broken up out of view of the camera.

Raptor Squad officers carried out a search warrant at a unit in Rosebery and arrested Yakiboy at 6.30am on Friday.

According to the Daily Telegraph, Yakiboy had been out on bail for a separate assault charge at the time of the incident and has been charged with affray, using an offensive weapon with intent to commit an indictable offence and breach of bail.

Personal messages reveal a dispute over money was in the center of the conflict.

Yacoub later released a WhatsApp exchange between him and Balapour where he futilely seeks money money he says is owed to him. 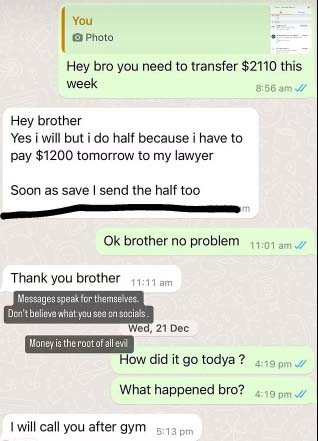