The atomweight from the ONE Championship had a 3-0 record in her brief career. She passed away on December 26 in Hawaii. Her older sister is ONE’s atomweight MMA champion Angela Lee. Angela confirmed her sister’s death on Saturday.

On Sunday, combat sports Podcast host Todd Atkins tweeted that United MMA had informed members that “all memberships will be cancelled, and students will no longer be billed moving forward”. 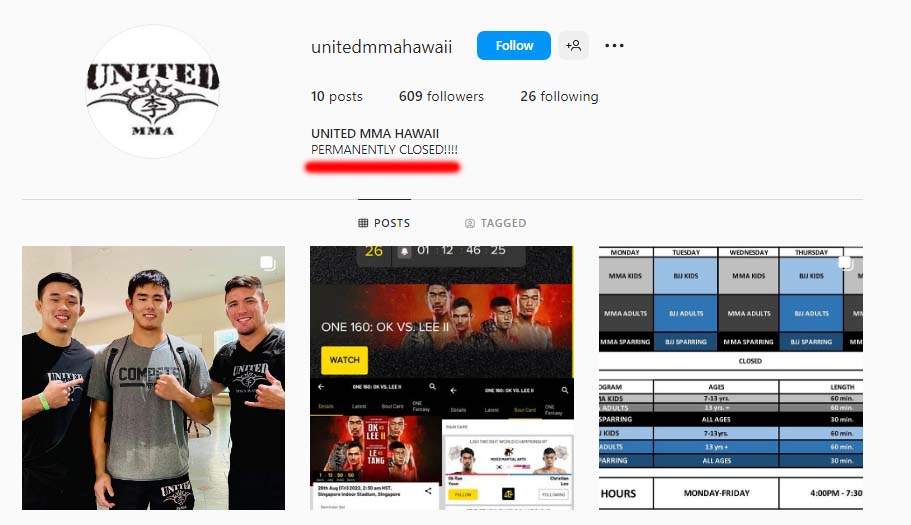 The instagram profile for the gym confirmed the rumor by adding ‘PERMANENTLY CLOSED’ to their profile.

The gym was previously on a holiday break and was supposed to reopen January 31st.

Victoria Lee was even set to compete on the ONE FC February 14th card.

The Lee family founded, owns, and operated the gym in Waipahu. It offered jiu-jitsu and mixed martial arts classes for both adults and kids. Victoria Lee was trained by her father Ken Lee. He who also helped his other children’s careers.

Adrian won an amateur title in Hawaii only days before Victoria died. Christian is the ONE lightweight and welterweight MMA champion. Also, Angela is the ONE atomweight champion.

The United BJJ Hawaii gym in Waipio continues to operate. It was founded in 2021 by Angela Lee and Bruno Pucci, who are both instructors.

“Please give our family grace and respect during this most difficult time. And please, check on your loved ones. Keep checking on them. Give them hugs and tell them how much they mean to you. You just never know.”