Liver King had previously denied taking PEDs for months which led to an explosive expose about his extensive PED use which was published several days ago. Retired UFC lightweight contender, Al Iaquinta has made some intriguing comments about Brian Johnson (aka The Liver King).

Iaquinta, who seemed to be seated directly behind Johnson at UFC 280, said the online star had a “dog sh*t” odor.

Iaquinta also commented that Johnson must not have had a bath in a year, thus rubbing salt in the wounds of Johnson’s fans. The former UFC championship contender tweeted the following:

“If you thought liver king was natty you’re shot BUT a fun fact you may not know is that I sat behind him UFC 280 weigh ins and he smelled like absolute dog s**t… guy must not have showered all year, absolute nerd.”

And in case you’re questioning Iaquinta’s account here’s how The Liver King described his own hygiene routine to a fan on social media.

When asked what he uses to bathe on social media, Liver King replied:

“liverking @josh26parker I don’t (per se)! Liver King doesn’t waste time on such matters… I also don’t use deodorant, brush my teeth or wash my hair… our species has an elegant, brilliant design by default — I don’t believe it’s ancestral nor is it in our best interest to block thermoregulatory mechanisms or disrupt our skin, hair and beard biomes with modern day consumer products (which is why I rinse off with well water and take a bar of tallow rendered soap to the groin and pits and call it a day). I stopped modern day hygiene habits over a decade ago… I stopped wearing deodorant… I’ve never cleaned my beard — ever. I can tell you that living by the 9 Ancestral Tenets, your detox pathways, body odor and pheromones will improve and you will smell, look and feel the way that nature intended you to smell, look and feel and it will confer a fitness advantage for life. Dominate your environment and make sure youlre on the Liver train.” 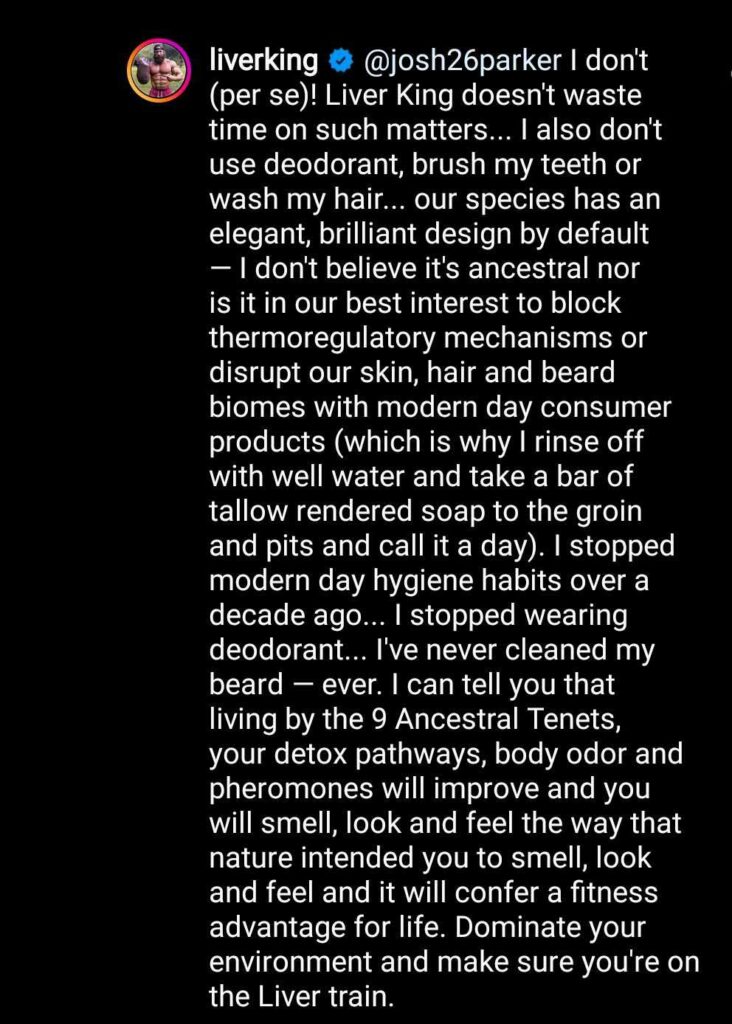