UFC became the first mixed martial arts organization to connect with a cryptocurrency platform in 2021. However, a boxer on the UFC roster recently cautioned fans that the site should not be used for crypto transactions.

“Don’t ever use @cryptocom! They’re robbing people and if you have money there take it out! [thumbs down emoji x3]”

Mokaev decided to expand on his motivations for the initial tweet after being informed by a fan that Crypto.com was the promotion’s official kit sponsor. He said that the site locked the accounts and balances of Russians as a form of discrimination. 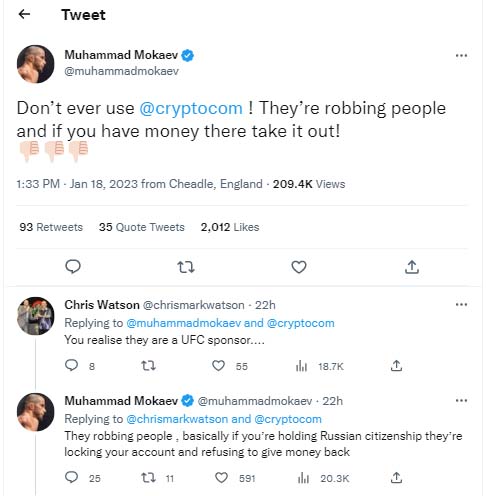 “They robbing people , basically if you’re holding Russian citizenship they’re locking your account and refusing to give money back.”

He also spoke out for the Russian people and pleaded with people not to generalise the population for the government’s actions.

“It’s not good thing, what have innocent people done? Then all Israel should be locked if we talk about equal stuff”

In a different response, Mokaev insisted that he was correct and would not retract or remove his tweet. This is despite the UFC’s affiliation with Crypto.com.

Mokaev’s debut in the octagon lasted for about 58 seconds. He executed a flying knee that knocked his opponent to the ground, and he followed it up with a guillotine choke to end the fight. The UFC gave him the “performance of the night” bonus as a reward for his performance.

He caught Sheikh Khalid Al Khalifa’s eye during his amateur debut, and Khalifa chose to fund the MMA prospect’s career.

Mokaev told The National: “At my amateur debut in 2015, I posted a video on Instagram and the prince of Bahrain, Sheikh Khalid [bin Hamad Al Khalifa] saw it. He tagged the Brave president, Mohammed Shahid, saying, ‘Watch out for this kid.’” 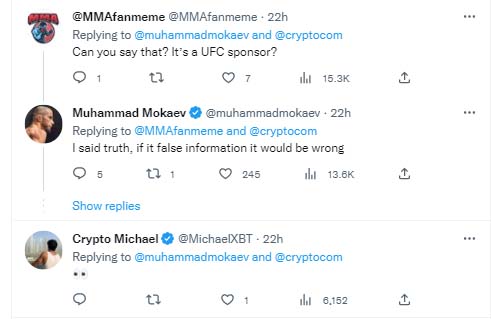 “Three years later I’m in Bahrain, competing and winning world championships, signed with Sheikh’s KHK MMA. And then 2020, I’m in Brave, 3-0 as a professional.”