UFC pay has been a huge hot topic in the sport. While Dana White hasn’t even been in all of the pools he owns many of the athletes on his roster face issues when it comes to meeting their basic needs.

In an attempt to make his financial situation better, UFC”s Mike Davis entertained an intriguing offer. It entails access to better seats than those Dana White has, a look behind the curtain, and interaction with other UFC competitors.

In order to reach MMA fans, Davis posted on social media about a sponsorship opportunity. The 29-year-old said that for $10,000, someone might have the opportunity to stay in his corner. In addition, the UFC lightweight was given the option to join him during the weigh-ins and walk-outs and a visit to the UFC Performance Institute (UFC PI).

“I’m entertaining the idea of a sponsorship opportunity. $10K and you will be in my corner. Better seat than Dana White. Behind the scenes of UFC. Visits to the P.I. Meet and greet all fighters. Weight cut experience, weigh in experience, walk out experience. Get to go inside the octagon post fight and more.” 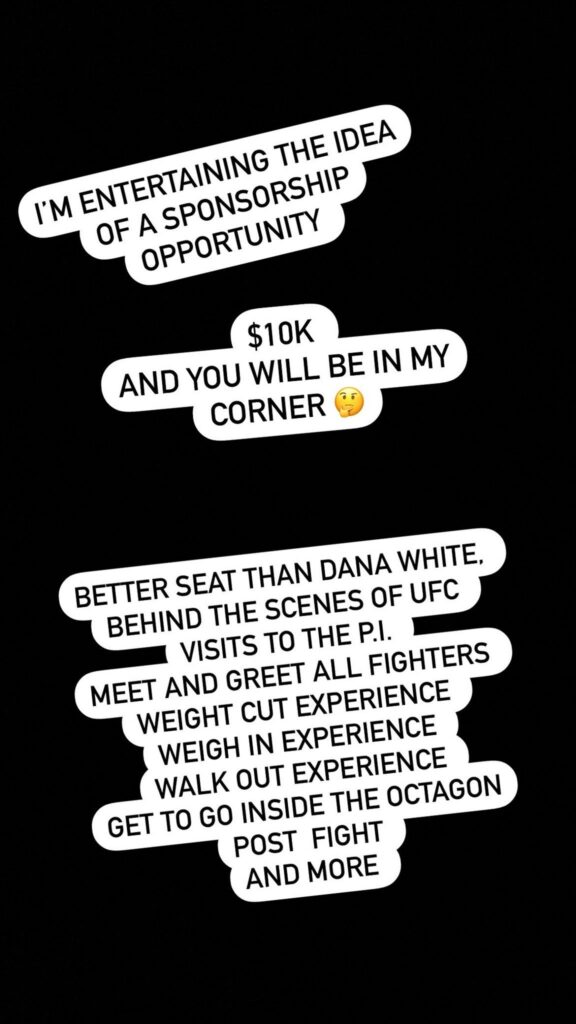 Since the UFC forbids athletes from wearing their own individual sponsors on the UFC kit, Davis’ concept adds a novel spin to the same. But it’s not unheard of. Previously Mike Perry offered a similar reward.

Mike Davis has an MMA record consisting of 9 wins and 2 losses with the losses being to Gilbert Burns and Sodiq Jussef. Davis competes in the lightweight division and is struggling to market himself. He shares the nick name Beast boy with another – much more memorable UFC competitor – Chris Beast Boy Barnett.

Perry wanted to raffle off a spot in his corner as sweepstakes. But UFC boss Dana White nixed the idea.

“You can’t do that,” an incredulous White said when asked “Platinum” will have to find a new way to pay off his taxes

Perry was cornered by a redditor at UFC 255 during a loss to Tim Means. Perry  was initially to be cornered by Darren Till in return for $5000 however after some drama he settled on a friend and his fiancé Latory cornering him.

The redditor ended up documenting his experience

“Thank you to Mike Perry for being a good guy throughout this experience. He couldn’t of been a nicer and more respectful person. I’m a fan for life. Truly a night I will never forget and cherish for the rest of my life.”