Dana White and the UFC both said that UFC Vegas 61 would not be open to the public or the press.

Mackenzie Dern and Yan are set to headline this weekend’s UFC Fight Night. Xiaonan will take place behind closed doors. The event is scheduled for Saturday, October 1, 2022, at UFC Apex in Nevada.

After the season’s last edition of Dana White’s Contender Series, Dana White talked with the media and discussed the choice to hold the event in a closed-door setting. White said that the media deserved a night off from their hectic schedule. However, he withheld any specifics:

“We just figured that you guys have been so busy lately we’d give you guys a night off. You guys are here on Tuesdays, here on Saturdays. Kevin actually showed up today. We need to give you guys a break. You’re welcome. Stay home, order a pizza, watch the fights. Enjoy yourselves.”

Although the move left the MMA world perplexed, Dana White said there is “no mystery” as to why the event would not be open to the public.

According to Mackenzie Dern’s intriguing revelation, the gathering was reserved only for Mark Zuckerberg.

Prior to her main event, the No. 5 rated UFC women’s strawweight talked with the media and revealed

“Mark Zuckerberg did NOT rent out the UFC Apex. That’s total bulls**t.”

However a UFCFightPass ring announcer happened to leak what the fuss was about.

“According to a rumor I heard this is why: Mark Zuckerberg rented out the Apex. They are testing out the new meta glasses. You will be able to watch the fights from home and feel like you were really there.” 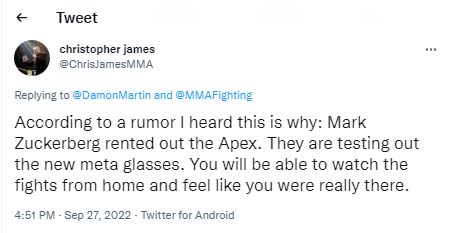 James’ bio reads “I am a professional ring announcer and I work for Island Fights on UFCFIGHTPASS. keep up with me here.”

Mark Zuckerberg confirmed that a new version of VR glasses, Meta Quest Pro, will be launched in this upcoming October.