Famous UFC referee Marc Goddard recently reacted to a viral video of a student who had a physical conflict with his teacher in front of classmates.

Recently, a video surfaced on social media and went viral. It’s about a physical altercation between a teacher and a student at Maywood Academy High School. In the video, a teacher and one student can be seen having a heated argument in front of class.

The arguments turned out to be a one-sided insult. The student kept being rude and challenging the teacher. He even went as far to threaten the teacher and use racial slurs.

The old teacher was calm at first and spoke gently to the student who kept insulting him. But, he eventually lost his calm. He initiated an attack and punched the kid right on the face. At that moment, a brawl instantly started.

By the time they exchanged blows, the class went wild. The teacher knocked down the kid several times and kept hitting him while he landed some punches once in a while. Not long after that, other teachers and school staff entered the room and separated them.

A Twitter user who shared the video sparked an online debate by writing, “Is he a Hero or a Villain? Teacher beats the brakes off 14 yr old student for squaring up on him.”

Marc Goddard is seemingly siding with the old teacher, saying that the kid was asking for it. He also compared it to his childhood where no kids would be daring enough to even talk back to their teachers.

“How’s that saying go? The more you f*ck around. When I was a kid, if I’d DARED spoken to a teacher like that I’d be more worried about the beating I’d get at home. This is a parental problem, & a broken “non consequence” society issue.” Goddard wrote.

Goddard continued to debate his argument with another Twitter user who said the teacher shouldn’t have swung his hand because the student only trash talked him. 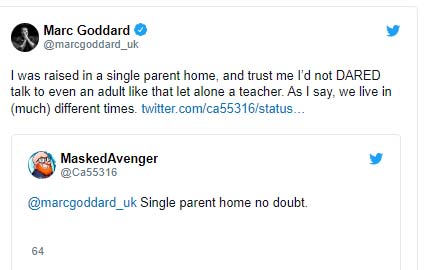 “Never once said that I agree with what the adult (however I do feel for him, greatly) did in this instance. The child’s actions were verbal not physical so the control & restraint lies with the teacher. This is not isolated & yes a societal/parental that runs way deeper.” Goddard said. 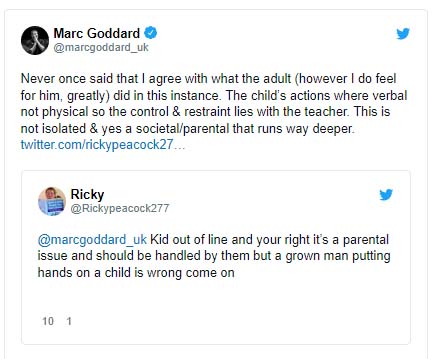