Paddy Pimblett is just 27 years old. When The Ultimate Fighter reality series started airing he was just 10 years old. This is perhaps why Pimblett couldn’t get over getting snubbed by TUF 1’s Stephan Bonnar at a convention years ago.

“I remember when I was kid, when they did the first-ever UFC Fan Expo in London, and I asked Stephan Bonnar for a picture and he walked away,” recalled Pimblett. “He said, ‘I haven’t got time,’ and walked away. And I’ve never forgot it. So eat s**t, Stephan Bonnar. Eat s**t, lad.”

Stephan Bonnar has had a bit of a wild ride these past couple of years. Bonnar was plucked by obscurity when he was tapped by the unholy alliance between Joshua Fabia and Diego Sanchez to join their ‘team’. From there on he went on to film their viral encounters and to be somewhat indoctrinated himself.

Covid pandemic had hit Bonnar hard and with the closing of his gym he was making money on the pro wrestling circuit. There he fractured his vertebrae and was subsequently in an odd video incident with the police and medical personnel. Bonnar has since been diagnosed – he had MRSA at the time and was in grueling pain.

Bonnar still heard all about Pimblett’s comments. He took to social media to address Pimblett badmouthing him.


“Paddy Pimblett’s running his mouth, saying that I didn’t take a picture with him at the UFC Expos. Well, you know what? I hustled shirts at those Expos,” he said in a video posted to Instagram.

“I was there all day to take pictures. The only time I wouldn’t is if I was coming back from the bathroom. I’d say, ‘Hey, I’ll take all the pictures you want with me just follow me to my booth, walk with me, talk with me.

“The only people didn’t get picture were those that were to bigger f****** muppets to walk and talk with me and come back to my booth and unfortunately Paddy was one of those muppets.

Of course, the loudmouth he is, Paddy couldn’t leave it on that and instead responded to Bonnar:
“What u lying for Stephan,” Pimblett tweeted. “Just own it lad me & me mate ran over asked u for a pic just 2 of us & u turned away from us said u didn’t have time.

“So don’t start talking pony now like u can remember it cause u didn’t have a f**king clue who I was not my fault bit ya on the a** now.” 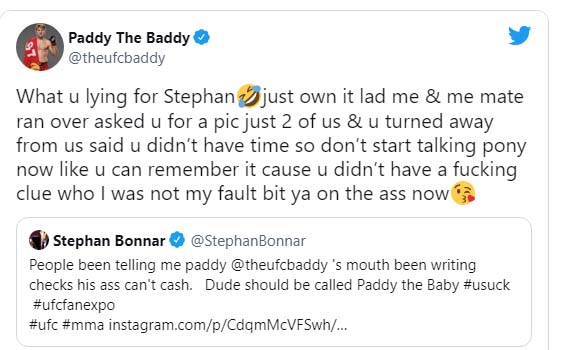