There was a big round of backlash when UFC announced the athlete kits will be prominently featuring their new sponsor – crypto.com . UFC is estimated to have earned upto $175 million from the deal but the athletes once again got nothing.

As a ploy to collect emails from the UFC audience, Crypto instituted fan bonus of the night. As initially structured the winner of popular vote would receive $30,000, the runner up $20,000 and the third $10,000 in bitcoin,

For starters the way the actual amounts are measly. For another, the fan vote would get tallied during the event, meaning that the main event winner was practically unable to even get all the votes in because by the time they won the vote was effectively over.

This produced several comical results with Rose Namajunas winning bonus for that awful performance at UFC 274 during which she lost her title to Carla Esparza.

UFC 275 wasn’t much more balanced. Valentina Shevchenko won the top prize despite a lackluster performance against Taila Santos that she won thanks to the accidental headclash that busted Santos’ orbital bone. In the end she edged out a decision victory. While elsewhere on the card Jiri Prochazka won a war against Glover Teixeira – and managed to get the title with a finish.

Not to mention that Zhang Weili would’ve been a valid winner with an epic KO over former champion Joanna Jędrzejczyk. 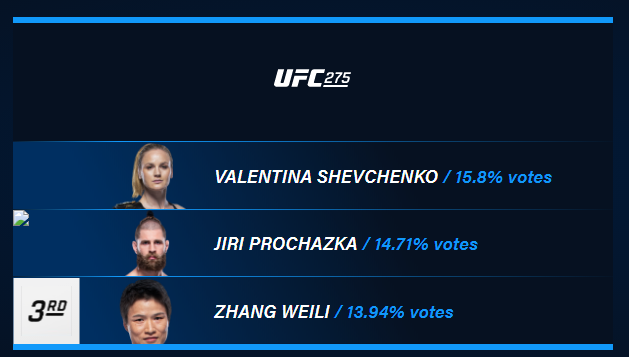 But things got even weirder .The bonus was first retooled to get tallied up 24 hours after the event ends as to not shaft the main event winner.

Things went sideways once again when audiences awarded $30k to Adesanya for his critically panned performance against Jared Cannonier.

It should be worth mentioning that Adesanya went 5 rounds with Cannonier to score a decision victory while Pereira knocked out Sean Strickland to earn his pending title shot.

But the most egregious of all was when Leon Edwards missed out on the top prize after UFC 278 Headkick KO over longtime champion Kamaru Usman.

That night the bonuses went to Costa, Usman and Aldo – two of the three had lost their bouts.

And Crypto.com is in trouble even without UFC. Back in June the value of the bonus slid 26% in a single day after bonus was awarded.

Also in June, cryptocurrency exchange  announced it was laying off around 260 employees, or 5 percent of its workforce, due to the widespread downturn in the crypto market.

But fan awarded bonus was a mistake to begin with. For one, the UFC had tried it before. Back at UFC 124 the organization had fans voting on the recipients of the $100k bonus.

“They blew it,” White told media that the fan voting will be a one-time thing after audiences awarded $100,000 to Mac Danzig, Georges St-Pierre and Josh Koscheck each.

St-Pierre defended his welterweight title with a lopsided unanimous-decision victory over Koscheck. Danzig got his bonus for scoring a first-round knockout. Oddly Jim Miller didn’t win the affections of the audience submitting (the now) lightweight champion Charles Oliveira with a kneebar.

“It’s one of the hazards of letting the fans vote. They’re always chirping about how we messed it up, and here we are,” said White during the UFC 124 press conference.

When all is said and done it’s all but certain Crypto.com is financially struggling and your favorite athletes might be paying the price and unable to win their bonuses. While the athletes might end up without incentive to tout UFC kits, the promotion certainly got theirs in the $175 million deal.