Adesanya has featured his father Femi in a YouTube video ahead of his UFC 276 appearance. In the video, Adesanya presents his father with a $37,000 worth gold Rolex Day-Date 40 watch. 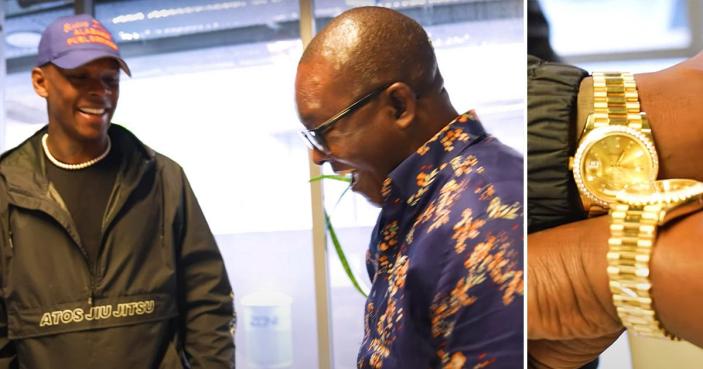 In the video, Adesanya was seen at his father’s office. His father looked to be working on a new home design for his son.

Adesanya gave his father a bag, which he unzipped, displaying the pricey accessory within. Adesanya Sr was taken aback.

He turned to his son, saying, “Wow thank you.” Before Adesanya could respond, his father said,  “We are matching.”

Adesanya then put his own watch next to his father’s. The two watches are identical in appearance.

“He takes all the burden in dealing with all this s*** so I don’t have to deal with it,” Adesanya said before hugging his father and explaining why he bought the watch.

Adesanya hasn’t fought since defeating Robert Whittaker in a rematch in February. He was promised a sizeable paycheck despite the lack of pay-per-view money.

On July 2, middleweight champion Adesanya will fight Jarod Cannonier in the octagon for the first time.

This will be his second fight after signing a hefty new deal with the company. The deal made Adesanya UFC’s second highest-paid fighter – after Conor McGregor.

His fortune came full circle when he originally signed with the UFC. Adesanya admitted that he was broke and down to his final $300 before his debut with the organization rescued him.

The 32-year-old has previously lauded his father’s contribution to his money management. “If I this was about money, I would’ve bounced,” Adesanya stated.

“I would’ve done this maybe three fights ago because I’m kind of set. I have one of the smartest men with money behind me and he’s helping me flip money the smart way.”