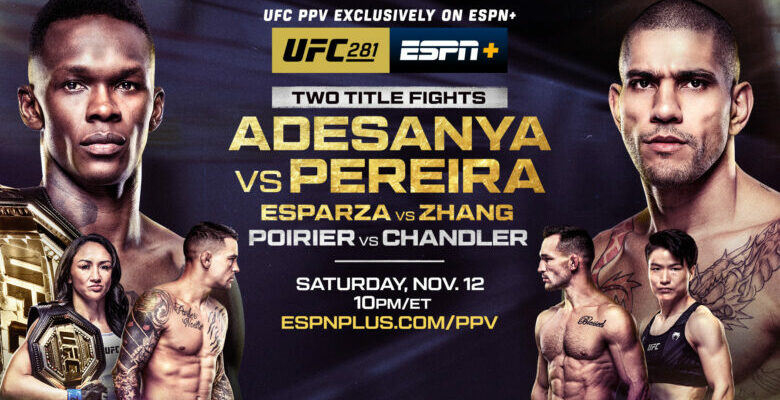 UFC 281 is the biggest PPV UFC event in 2022. The event has several highly anticipated matchups. It will to take place on November 12, 2022, at the Madison Square Garden in New York City, New York, United States. The main card of the event will feature 5 events including a highly anticipated clash between Israel Adesanya and Alex Pereira.

There are crackstream, reddit stream and methstream alternatives that allow for you to watch the event uninterrupted.

The early prelims start on noon on the East Coast. 10:30 a.m. ET for early prelims. The main card starts at 2 p.m. ET. The entire card is only available on ESPN.

Many television channels across the globe will be showing the event as a part of the deal that was struck with ESPN. UFC 281 is available to watch in United States United Kingdom and majority of Europe.

Plenty of fans try to stream the fight from these sites:

The entire UFC 281 card will be streaming on ESPN Plus. As of right now the pay per view is priced at $74.99 for existing subscribers. In addition to this there are plans available at $74.99 per year.

UFC Bundle is another viable option for non subscribers to get access to the PPV event.  The bundle comes with a one year subscription to the platform along with access to the UFC 281 card. This bundle is priced $99.98.

Disney Plus bundle is another viable option. This option will set you back $83.98. This includes the PPV and $13.99 per month access to ESPN Plus, Disney Plus and Hulu with Ads.

The prelims will be available on ESPN Deportes (Spanish) and ESPN News which is available on a variety of platforms with subscriptions. The platforms are Hulu Live TV, Sling TV, Fubo TV, Vidgo, AT&T TV and YouTube TV.

In the United Kingdom UFC 281 prelims and main card will be broadcast live on BT Sport 1 and simulcast on the BT Sport app and website. Contract free monthly passes will set you back about £25 ($33.9). These can be cancelled at any time. BT Broadband ownership is not required to purchase the passes.

In case you want a long term subscription added to existing BT Broadband or BT BT packages you can opt in for the ‘Sport’ contract which is priced  £15 a month or ‘Big Sport’ priced £40 per month.

Sky TV customers can add BT Sport to their television with a £20 per month contract.