The event is expected to take place on July 2 in Las Vegas. Nothing has been officially announced at the moment. 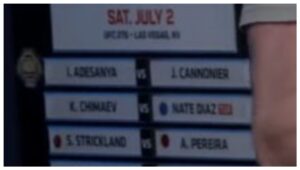 A list of bouts on the wall behind White could be seen, and under the headline “Sat, July 2” it lists Diaz and Chimaev among others.

Among them were Middleweight Champion Israel Adesanya and Jared Cannonier, Diaz and Chimaev, Sean Strickland and Alex Pereira.

In recent weeks, Diaz has expressed his interest in finishing the UFC contract. The hold up in booking Diaz has been wrapped around the fact that Diaz isn’t looking to resign with the UFC which made the brass bench him. He’s called out the organization repeatedly online but to no avail.

Diaz last competed in June 2021 against Leon Edwards at UFC 263. Despite coming up short via unanimous decision. Diaz left a lasting impression. giving Edwards a late scare in the final minutes.

Khamzat Chimaev, meanwhile, is coming off of the biggest win in his career – he beat Gilbert Burns at UFC 273. After that, Dana White said they wanted to book ‘Borz’ against Colby Covington, but perhaps they have changed their mind.

“in a perfect world, if everything plays out right, I would love to do Khamzat vs. Colby if Khamzat should win on Saturday night.” Said Dana.

Obviously, nothing is set in stone. Bookings have a way of falling apart. At the moment, however, it looks like the UFC has found a pretty thrilling lineup for their July 2nd  event.