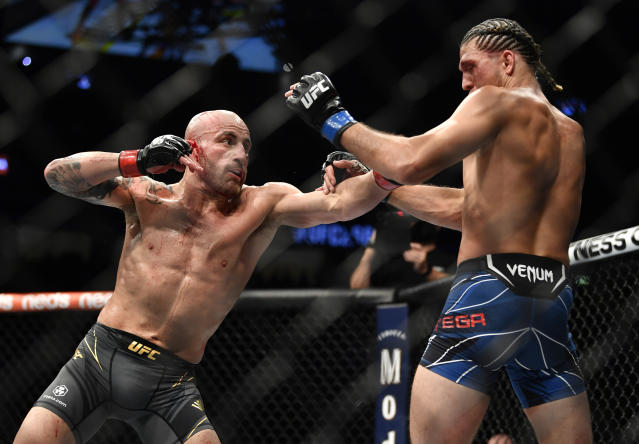 What an amazing card UFC 266 was. The card saw not only the return of Nick Diaz but also an incredible match up in Brian Ortega vs Alexander Volkanovski. The terrible twosome cannot be praised enough. Not only did they both come out swinging but the fight was a delight to watch because even though Ortega was getting outstriked consistently he would not stop spamming the submission attempts – two of them very close. A guillotine – and a triangle that was admittedly even tighter. But it looks like it paid off for Volkanovski to bring in Australian prograppling ace Craig Jones to help with the preparation because Volkanovski was truly ready – and in fact punished some of these grappling attempts in a brutal fashion.

Ortega’s survial was very questionable at the end of the round 3. At the buzzer he was left laying on the mat as the cuttman approached and started trying to recover him. He was only brought back to consciousness by a teammate dragging on his arm to get him to sit in the corner chair. But when round 4 started – Ortega was game. in spite of the ringside physician’s concern Ortega insisted on continuing and was probably falsely advertising that he was still able to see- at the time there was a huge swelling above his eye. And frankly he looked to be – zombified, kind of.

But regardless of that he came out swinging once again. And wasn’t really letting this fight become one sided in spite of what the scorecards would have you believe. Serious props to Ortega for putting on that show. There’s no doubt this fight is a must see for every fan.