Tyson Fury is not letting his travel ban hold him back. The recently retired boxing champion lined up the first fun exhibition. He confirmed earlier today that a boxing bout with Game of Thrones star Hafthor Bjornsson was set for November. 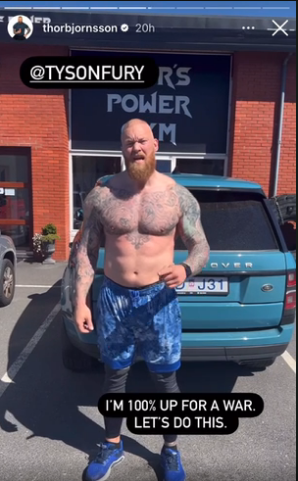 “It would be a bit of fun,” Fury told the Telegraph.

“It would be great to get in there in front of, say, 70,000 fans and show him what boxing is all about, make him miss, and knock him out.

“We are talking to his team at the moment and it is definitely something I’m interested in.”

When the two met they actually were matching in stature – both are towering at 6ft 9inches.

Fury has been trying to stay in the mix ever since his ties to the Kinahan family came back to haunt him.

The Irish Sun afterward reported that immigration officers prevented Fury from boarding the trip to Manchester.

“He tried to board another trans-Atlantic flight but the immigration officials told him to wasn’t allowed on the plane. He wasn’t happy with the decision but accepted it and then left.”

Fury was a previous client of the Kinahan and Kinahan-founded agency company, MTK Global. He declined to comment when asked about his association with Kinahan before his most recent professional boxing contest in April against Dillian Whyte.

This week, John Fury, acknowledged that they were both facing trouble traveling to the United States for the August bout between Jake Paul and Tommy Fury.

He said: “You (Jake Paul) can have it on the sixth of August but it’s got to be not in America because all of us (sic), I’ll be honest with you, are suspended and banned for life, I can’t get to you at all, Tyson can’t get to you because he’s a got a few issues at the moment so Tommy’s got no team.”