Recently, Fury challenged Ngannou to fight him at Wembley this year on social media.

As Jake Paul gets ready to face his brother Tommy Fury, Tyson Fury has continued to be active on Twitter and Instagram during his two months away from the ring. The heavyweight champion may already be restless.

Fury tweeted out of the blue a photo of Ngannou with a chicken on his head. An ongoing dispute with UFC star Ngannou heated up.

Ngannou replied: “Don’t you dare think that I take my eyes out of you. You’re still my priority! I’m coming for all the smoke. 2023.”

Fury responded: “Bring it on big boy. You wouldn’t last a round me muscles.”

Bring it on big boy.

In an exhibition match between the two, a cross-over battle under hybrid rules had been proposed. Fury gave all the specifics.

Fury said, “Yeah, I think it would be an exhibition fight. Great, great clash of the titans and obviously I would win.”

As for Ngannou, he recently shared an update on his knee saying:

“If everything goes well, I will be ready by the end of the year because it is going to be nine months,” Ngannou said. “(I want to be back in) late December or early next year.”

While Fury has called for a bout as soon as this year, the earliest that one may occur is in 2023. Following his decision victory against Ciryl Gane at UFC 270, Ngannou may have competed in his last match in the UFC. 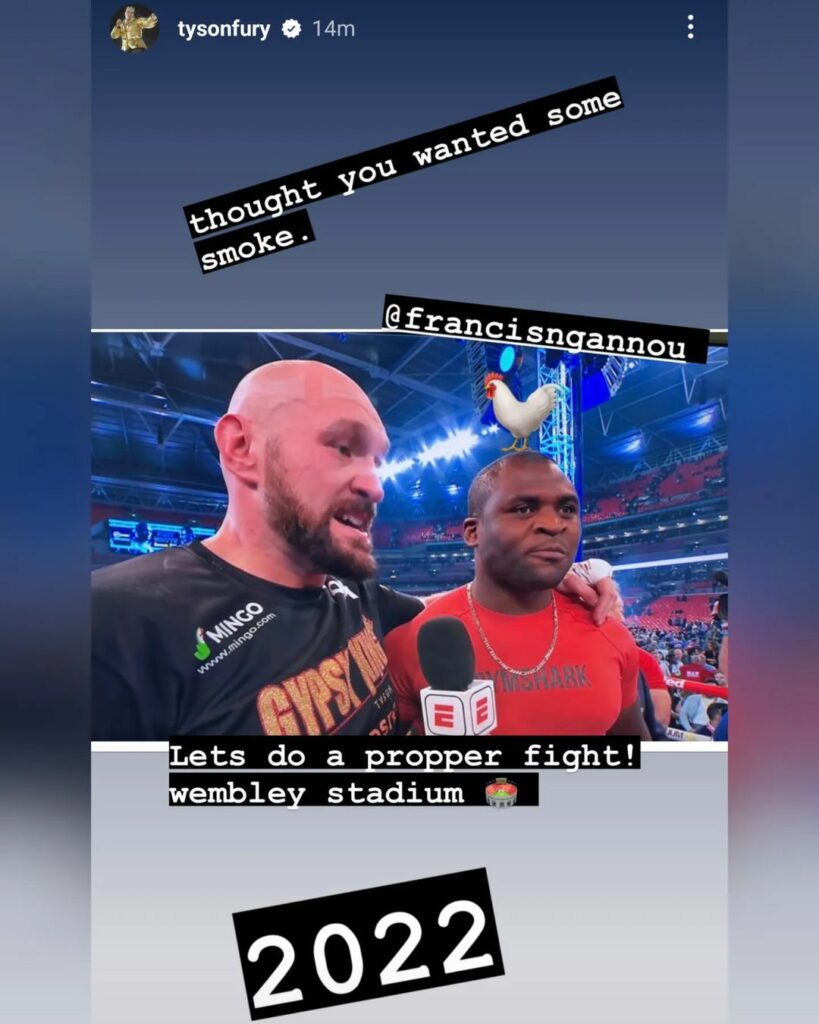 Ngannou is bound to the promotion for three more bouts or one more year due to a stipulation in his contract. His contract had already ended in January, so it was either that or the other.

“If I sign another contract now, and basically the same model of a contract, I’m screwed. It’s not happening ever. So we have to figure out a way to implement this into a contract.”