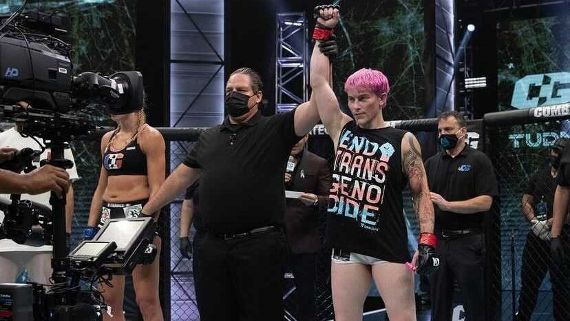 Alana McLaughlin is making history tonight. She will be the first trangender woman to step on the professional MMA stage. First openly trans one that is – Fallon Fox had made her debut seven years ago to much controversy since her gender hadn’t been initially disclosed.

According to The Trans Sporter Room podcast McLaughlin was a former militarry service member that left the service in 2010 and transitioned after. As a former collegiate athlete McLaughlin is certainly a gifted individual.

“I’m 38, so if I’m going to do anything serious competitive athletically, like now is the time,” she told Outsports. “Every fighter’s got an expiration date, and I want to do it while I still can.”

Her opponent Celine Provost certainly seems game. At least up until the point she got submitted.

The winner wasn’t clear cut at first – the Provost threw a flurry of good punches in round 1 however she was short of finishing. McLaughlin returned in round 2 and submitted Provost. Provost’s record contained only one fight – that she lost prior to last night’s event.

You can check out the finsh below: