Michael Chandler has showcased that he’s a one of a kind. Former Bellator champion is pushing 36 but still looks shredded.

Chandler boasted about his physique on Instagram prompting many fans to side eye the vascularization and the sheer amount of muscles Chandler is capable of packing on.

It’s widely known Chandler is among the bigger weight cutters at lightweight (155lbs) and reportedly comes down from 185lbs.

Not to mention that he’s all heart once the cage door closes. Chandler last competed in UFC when he delivered that stunning front kick and became the first in the history of UFC to knock out Tony Ferguson – and all after losing round 1. After Chandler posted the following picture on instagram a number of fan accounts reposted it admiring his looks. 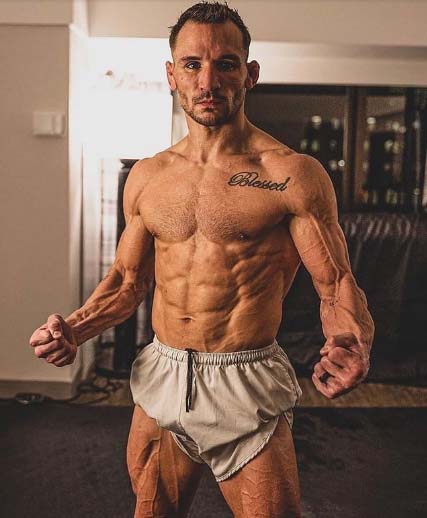 Chandler looks quite impressive. But there’s one party that wasn’t impressed – Tony Ferguson. While Ferguson is spending time at Harvard business school (yes. really ) he took time out of his busy schedule and left a simple comment on instagram: For those unaware the ‘juicebox’ emoji is synonymous with juice which is a longtime synonym for PED use.

If Chandler is indeed juiced he’s very impressive hiding it. Chandler has undergone 7 USADA tests this year – one in the 4th quarter of 2022.

Chandler previously denied he’s used PEDs in the past saying:

“The good thing is, I can sit back and see the accusations and see the things people say. Any sane person would say that’s a feather in my cap: ‘You obviously look so good or you’re such a conditioned athlete that people accuse you of those kinds of things.’ For him to say that, I don’t really understand where his basis is. All he’s ever said is ‘I think he’s using them’ or ‘He is using them.’”

“At the end of the day, it’s the media’s job to take what athlete say or what certain talent says and put it into print or put into the internet,” Chandler said. “That’s their job. Could they pick and chose their headlines differently? Of course, because clickbait is a real thing. It’s unfortunate because I have so much confidence in myself that I am 100 percent and I know I am 100 percent clean that I wish I was in an organization.””