Hafthor Bjornsson and Eddie Hall boxed 6 rounds in Dubai this past weekend. It was a boxing debut for former strongman, Hall, while Bjornsson had prior experience.

After the fact, the boxing match booked as ‘The Heaviest Boxing Match In History’ went to Bjornsson thanks to two knock downs of Hall. Hall also sustained significant cuts over both of his eyes in the process. Meanwhile Bjornsson got badly shaken once – but was propped up by the ropes and went on to win the exhibition.

Eddie Hall gave his thoughts about the match. In the video he said he felt accomplished enough to fight Bjornsson who is one of the biggest men on earth.

Now Hafthor is ready to show his own injuries sustained during the clash of giants. A bruise could be seen forming under the right eye of Bjornsson – but it’s since gone pitch black. 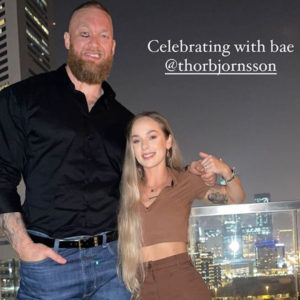 Bjornsson complemented his opponent during the interview after the results were announced:

“I’ve never been dropped in training, so hats off to him. He really can punch. He wasn’t lying! But today, I feel technique won.”

Thor added: “Understandably, he seemed a bit angry still. He lost the fight so it’s understandable as well.”
“But I’m happy, if he wants the rematch I’ll take a rematch no problem. Would you guys like to see a rematch?”

Hall went on to accept defeat:
“You know what, I can take things as a man. It is what it is, that’s boxing.”

“At the end of the day, I’ve just fought the biggest man on the planet in a boxing match.”

“I’d like to see anyone else get the balls and do that.”

“It’s been a hell of a journey; I’ve enjoyed it and hopefully there’s a rematch and we can do business again.” 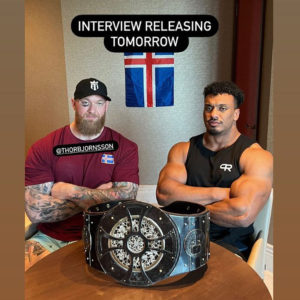