UFC’s run in 2022 ends with another questionable judges decision. In the main event of UFC Vegas 66, Sean Strickland was matched with former title contender Jared Cannonier.

Strickland was coming off of a loss to Alex Pereira. Cannonier went 5 rounds with former champion Israel Adesanya and convincingly lost.

According to official statistics, Cannonier landed 141 significant strikes during the contest while Strickland landed 152.

There was a disparity in where the strikes were aimed at. Strickland landed 82% of his significant strikes at the head of Cannonier while Cannonier played it more evenly between the head and the body – with 40% each.

But the issue appears to be in how Strickland spaced his Strikes – even though he landed more on paper the judges were split on their decision. 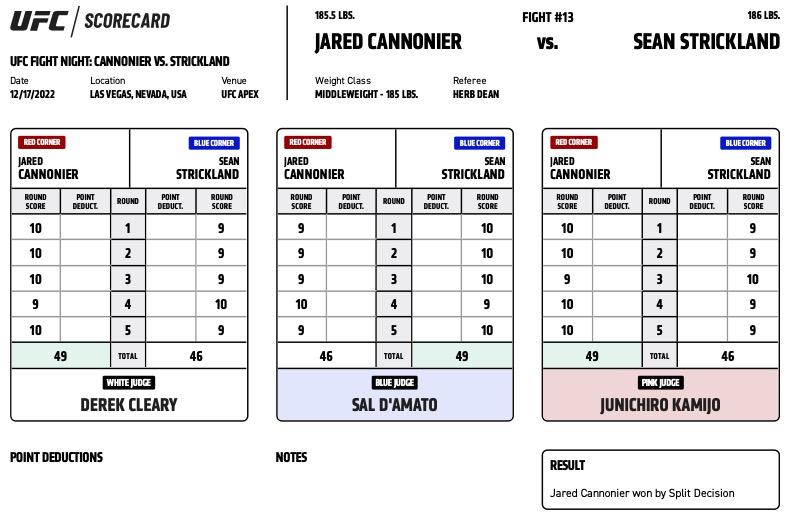 This was another case of strange MMA judging. Two judges awarded Cannonier the victory 49-46 and one awarded 49-46 to Strickland.

Strickland was visibly upset after and quickly took to social media to explain how he felt about the ordeal:

“I just want to ask a judge when you go back and look at the data do you ever feel bad for robbing guys because you don’t know a damn thing about fighting?? Hmmm anyways thank you everyone.. Coaches, fans and haters! Onto the next!!”

Strickland accompanied the caption by a video of his reaction. In it he goes on to say:

“Hey, guys, I’m f*cking sore, loser. Hats off to Jared. But again, you got you have judges that don’t know how to f*cking do their job. You actually look at the scorecards. You look at the significance strikes. You look at how many times I wobbled him and, you know, you had people, experts in the field come up to me and say, yeah, man, I don’t I don’t know how you lost that one.”

“You landed way more. The scorecards should say it. So anyway, so I’m going to shut the f*ck up now. Get out of my cell box. Thank you guys for supporting me. Thank you. You see, back to drawing board on the next one. Thank you, guys.”