Synthol is used to artificially inflate arms. Commonly known as ‘fluffing’, the practice is popular with bodybuilders who are looking for a way to rapidly bulk up with minimal effort. This type of thing made ‘Ruki Bazuki’ (Hand Bazookas) into a viral star. 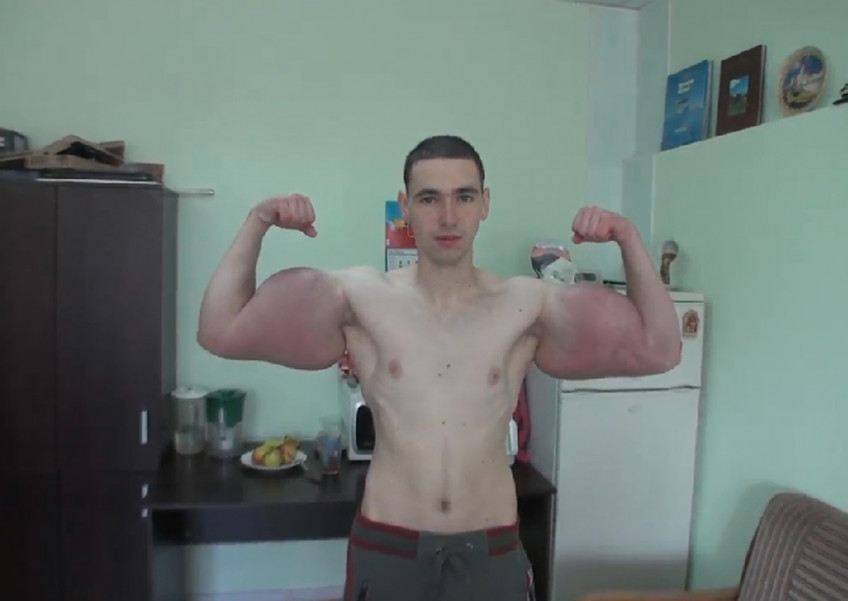 As far back as 2017 he had biceps and triceps measuring roughly 60cm in circumfrence.

Western media dubbed Kirill Tereshin ‘Russian Popeye’. He has been one of the big stars on the EPIC MMA freakshow promotion circuit and recently instigating an incident badly backfired.

During a face off ahead of his match, ‘Russian Popeye’ initiated clinch with his opponent. His opponent easily countered and Tereshin ended up knocked out on the studio floor as audience looked on.

Thankfully he soon regained consciousness and the face off could go on without further interruptions.

He previously faced Oleg Mongol. Mongol VS Hands of the Bazooka is a legendary revenge that humanity can contemplate right now. Murad will make his first appearance in the Epic Octagon to declare his ambitions to win! It was in this tournament that a challenge took place, which will become the beginning of a great battle – Elena Berkova VS Irishka Chiki-Piki. And also confrontations await you: – Mini-Hulk VS Sanya Byk – Russian Tyson VS Danya Bely – Fight 2 on 2. Salam Rabadanov / Supyan Dzhabrailov VS Oleg Blokhin / Mikhail Spirin.