UFC veteran referee John McCarthy is not a fan of Power Slap, Dana White’s most recent venture in combat sports.

The UFC president’s perspective on slap league was aired recently. This happened just days after a video clip showing a competitor who had endured a surprising deformity during a slap competition in Romania went viral.

McCarthy expressed his disdain at the Nevada State Athletic Commission’s decision to regulate what he views as nothing more than “sanctioned brain trauma.”

McCarthy said on the Weighing In podcast:

“I’m all for competition and I’m all for any kind of competition there is for the most part. I really find it hard to believe, especially with a place like Nevada, that they are regulating sanctioned brain trauma. That’s what it is. There’s no defense of any type.”

“What are these guys getting paid? They ain’t getting paid s**t. Not enough for f**king brain damage and there’s no defense. There’s no way of stopping that. It’s all about how hard does your opponent hit you. If he can hit really hard, it’s gonna happen. It’s crazy to watch.”

And he wasn’t the only one a number of MMA aces condemned the venture: 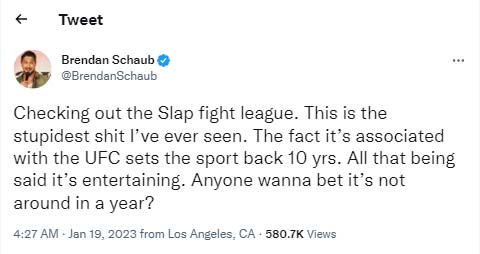 On a recent episode of “The Joe Rogan Experience” podcast, Rogan remarked,

“I love Dana, and I would be a hypocrite if I said I wouldn’t watch this, because I will watch it – but this is not my cup of tea.”

“What I like it problem solving. I like puzzles. What I like is (Sean O’Malley) and (Petr) Yan. This f**king Russian assassin is rushing the gates and you’re kicking and moving away and jab at him. That’s what I like. I love technique.”

Although it has been around for a while, slap competitions are more common in Eastern Europe and Russia than it is in the United States.

Couple of years ago Rogan shared the following about having watched slap competition:

“They just stand in front of each other and they let each other slap each other in the face. And for first of all, whoever goes first has such a monster advantage. Because they. They KO each other all the time. “

“These huge guys. And they swing from the hip, and the other guy doesn’t even move and they open palm strike each other in the face.”

“And they all thought it was cool because, like, that might be the only time where people think it’s cool to be right next to someone who got violent brain trauma.”

“all the people were standing around and they were laughing and smiling while this guy went unconscious and I was like, That’s so odd. Like, did they not know that this is a really bad.”

“Well, it’s almost like it’s not real because he is – it’s slapping a punch. Like, if he kicked him in the head and the same thing happened, he goes unconscious and falls by people. ‘Oh, my God. Oh, my God.’, They’d be freaked out. But instead they slap each other and everyone’s like, Ha ha. Like, what the f**k?”