Israel Adesanya lost his middleweight title rather unceremoniously. Adesanya was leading 3-1 going into the 5th round. He then discovered he was having an issue with his peroneal nerve which is sometimes referred to as the ‘drop foot’.

With his movement compromised, Adesanya was crowded by Pereira and after several vicious strikes, ref Mark Goddard stepped in and called it.

In the opinion of some, the main event had a rather contentious conclusion thanks to the referee in charge, Marc Goddard.

Some supporters thought the interruption was premature, however. Referee Marc Goddard responded to criticism from certain MMA circles by defending his choice in a tweet. 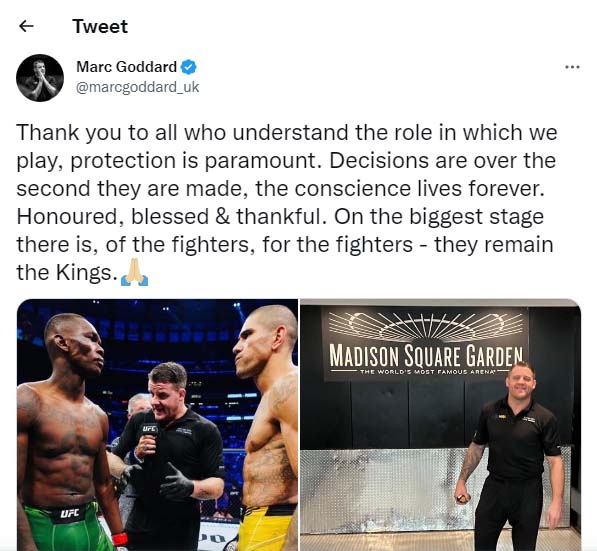 Goddard stated, “Thank you to all who understand the role in which we play, protection is paramount. Decisions are over the second they are made, the conscience lives forever. Honoured, blessed & thankful. On the biggest stage there is, of the fighters, for the fighters – they remain the Kings.”

Israel Adesanya discussed the stoppage in the main event of UFC 281 with Ariel Helwani on The MMA Hour after his loss. Adesanya defended his position and said that he was well-prepared to contend with the might of his Brazilian foe.

Israel Adesanya also cleared Goddard of any wrongdoing because of the stress of the situation.

The referee presided over Adesanya’s brutally harsh match with Kelvin Gastelum at UFC 236. Therefore, Adesanya said that Goddard should have had more trust in him:

“Again, I’m a champion, I don’t blame him, Marc’s a good referee. I agree [he’s top two or top three]. But you reffed the Gastelum fight, you’ve seen where I can go to. You should have that kind of faith in me. And also, you gave Kelvin Gastelum every chance after he got dropped the most in any title fight in UFC’s history. So I didn’t get dropped, yeah I got wobbled. But I wobbled ’cause of my leg. Again, you’re under the pump, it’s a big show. It is what it is.”