Mackenzie Dern has had a very interesting trajectory in the UFC. Dern came from the world of professional jiu-jitsu. She’s won every accolade that could be won there including beating Gabi Garcia (who at the time weighed roughly 2.5 times Dern’s weight).

But her path in MMA hasn’t been easy. Dern was already rather burned out when she was toying with the idea of moving away from jiu-jitsu competition. In return she was struggling to make weight and was even eliminated from 2017 ADCC early.

But her jiu-jitsu skills were still allowing for her to cruise through her MMA bouts unhindered. Dern was initially a part of MMA lab back in Arizona where she came in with now former fiance (bjj ace and former UFC athlete) Augusto Tanquinho Mendes.

But her tenure at MMA lab would be cut short when she was kicked out from the team due to the fact that she wasn’t really taking MMA seriously.

“… after my last fight, Coach Crouch, he just invited me to leave the team. I think really we don’t have a 100-percent understanding. I think he knows his decisions more than me. I think with just the consistency, he wanted me to be there more often than what I was, but everything happens for a reason.”

Dern would go on to relocate to California and make rounds surfing around the world. There were reports of her being reluctant to even train outside of camp back then but regardless her career kept picking up steam.

Bleacher Report’s JE Snowden wasn’t very upbeat on Dern’s state at the time his article The Next Rousey? Mackenzie Dern Has the Look, the Skill—and the Determination was published: 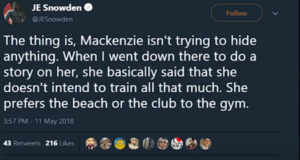 Curiously both of these tweets have been deleted since.

She had made it into the UFC after going 5-0 in her MMA career. From the get go she seemed to be in a funk and was clearly overweight going into her bouts.

But that would all change when she announced her marriage to pro surfer Wesley Santos and her pregnancy.

In February 2019, Dern announced her first pregnancy.  The pregnancy meant that Dern would be putting her 7-0 professional MMA career on hold. On the other hand her focus was renewed and she seemed more aware of the limited timespan one can spend as an MMA pro.

It seems as though her new marriage and pregnancy replenished Dern’s desire to provide for her family. Dern gave birth by June 2019 and booked her next UFC outing for October.

The pregnancy (and marriage) had cost Dern a substantial part of her following. According to Dern herself she was hemorrhaging followers. Not to mention the other viral Mackenzie Dern story – her ever evolving accent.

Mackenzie Dern was born to an American mother and a Brazilian father – but she was also raised by her stepmom Luciana Tavares another bjj black belt. Dern’s father, Wellington Dias is a widely beloved World champion in jiu jitsu who still competes to date.

While Dern does have American step siblings she’s surrounded by Brazilians including her father’s family and her husbands and speaks Portuguese day to day. Dern’s previous public relationships were also with Brazilians –  Augusto Mendes and Marcus Almeida.

Dern was prepping at Blackhouse MMA at this time – but more trouble brewed below. In fact, Dern’s surfer husband had gotten in a scuffle with her head coach over money.

“My ex-coach Juan Gomez, I don’t know what happened that he called us to go to the academy to talk,” Dern said on the What the Heck show.

“I think he was unhappy with a bonus, like money-wise for my last fight. Basically, I always ask my coaches, ‘Hey, during camp, if you have anything, just talk to my husband.’ Obviously, at home me and him talk about everything, so we’re the same person, but when I’m in camp I don’t want to have to think about it.”

“We went to the academy and he just swept dirt onto my husband, pushed him, and my husband pushed him back and they just went into a fistfight. It wasn’t like a brawl, a crazy brawl, it was like a street fight or technical fistfight. Back and forth, my husband’s doing feints, and I’m like, ‘Where’s he learning all this?’ It was so crazy.”

Dern would quickly find a new home with the RVCA gym and Jason Parillo as her boxing coach. It seems as though her father, Megaton Dias would be stepping up bigtime and coaching her in grappling instead of Chekmat’s Leo Vieira.

And then the news broke that Dern had signed with her new management.

“I’m excited for the next phase of my career and working with Paradigm,” Dern said in a press release. “I really feel that, as a team, we will reach my full potential as a fighter inside and outside of the cage!” 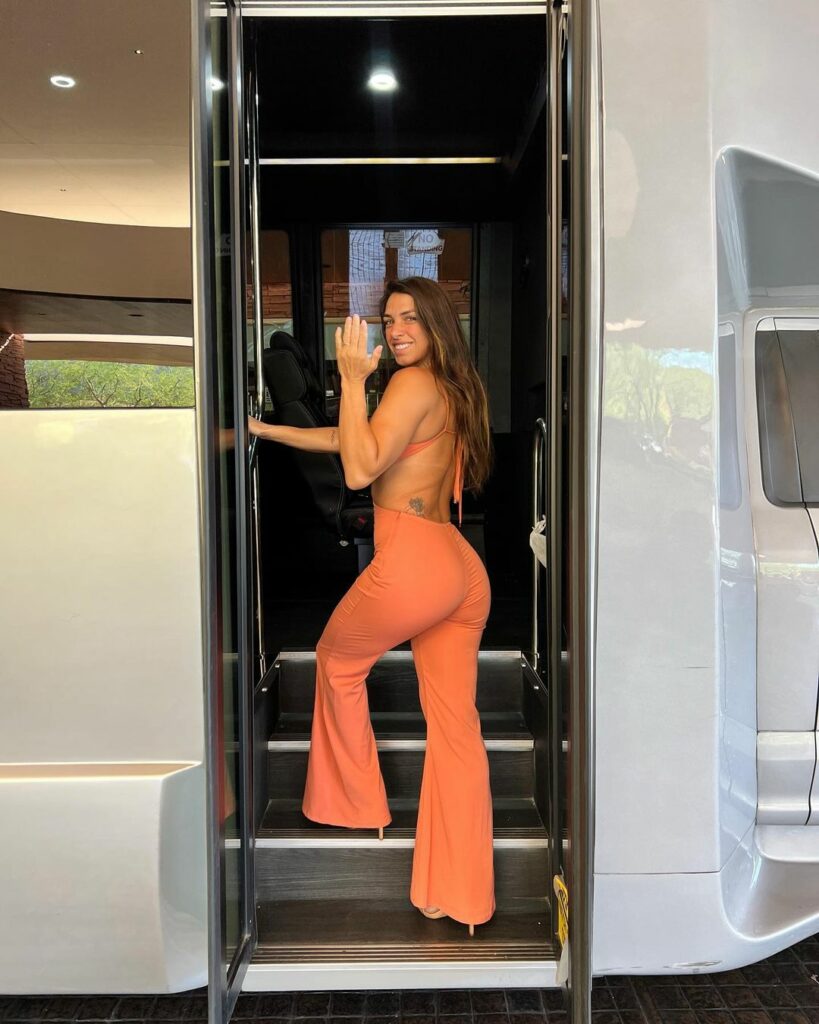 Fast forward to 2022. By this point Dern has 2 losses on her MMA record – both decision losses to Brazilian aces Marina Rodriguez and Amanda Ribas. But Dern’s following dwarves the majority of others. Her instagram account alone has over a million followers. 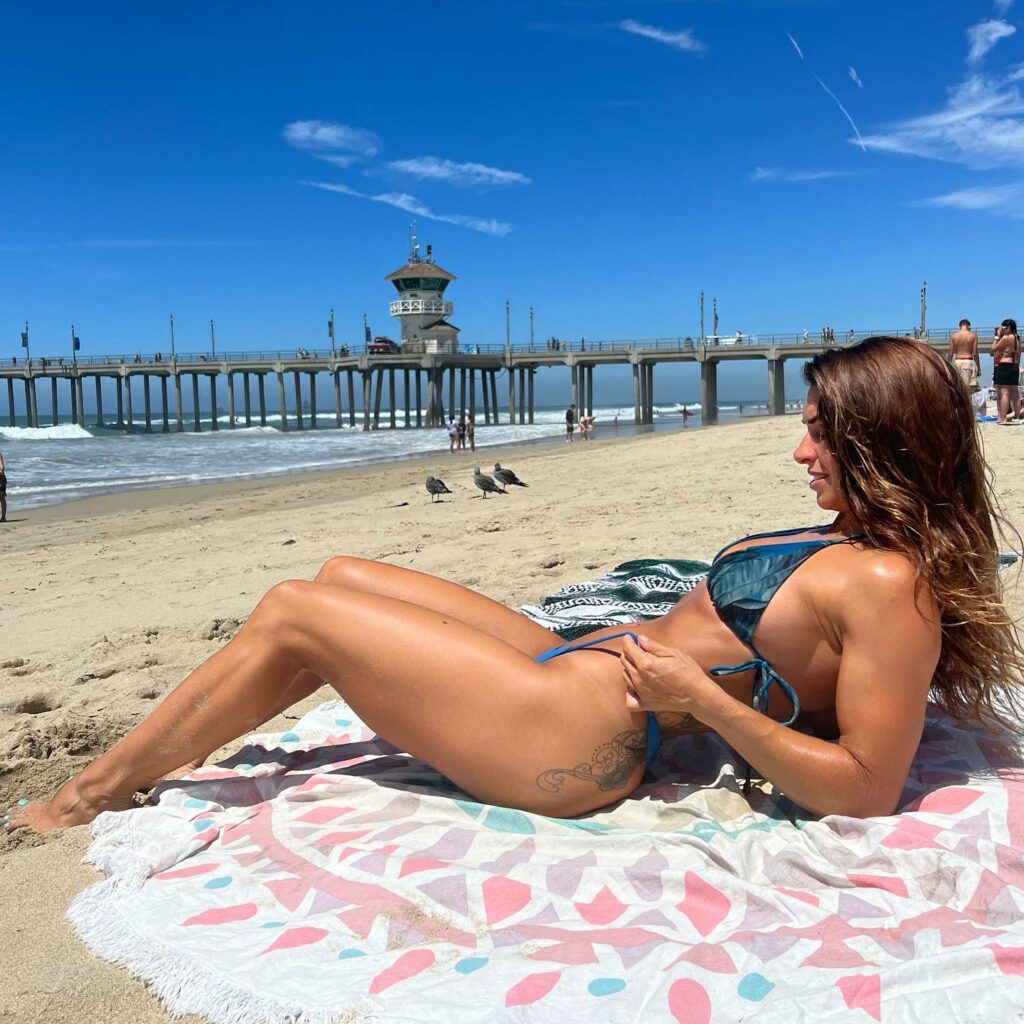 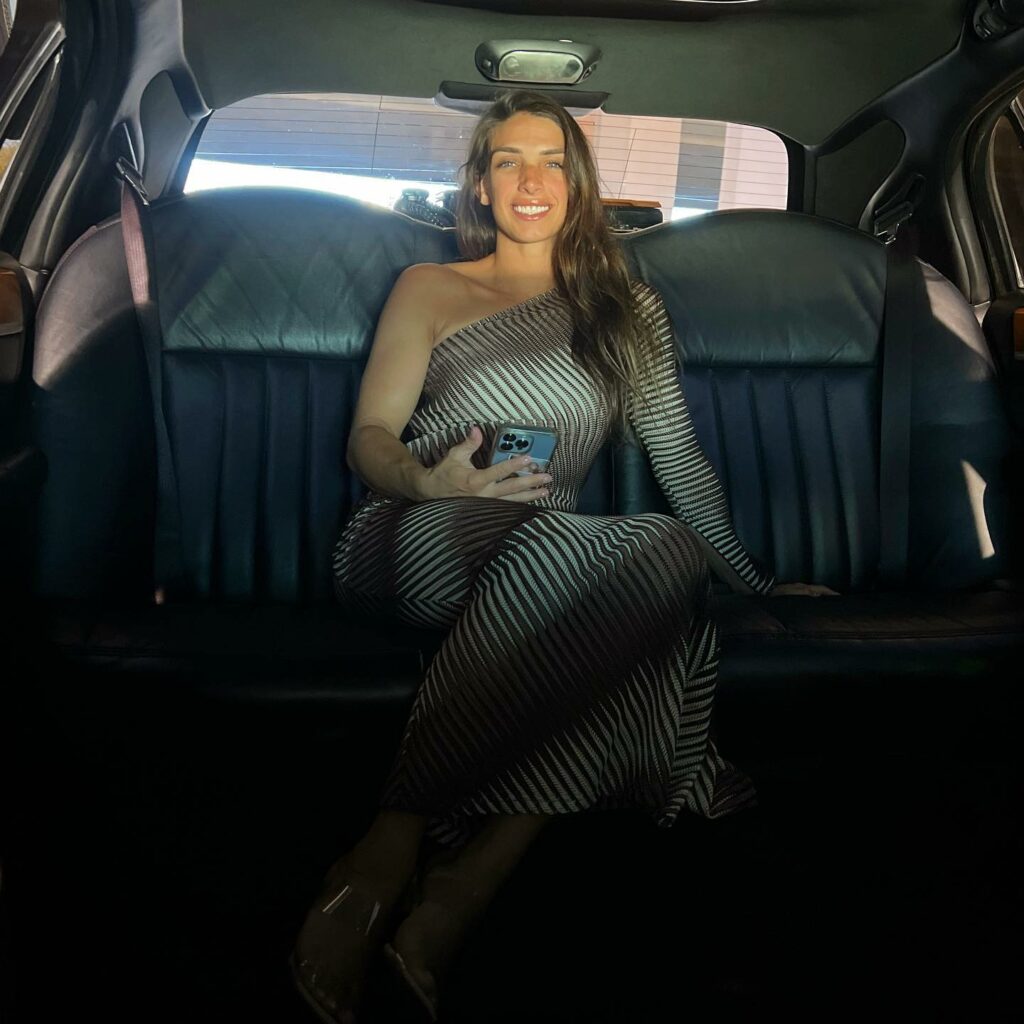 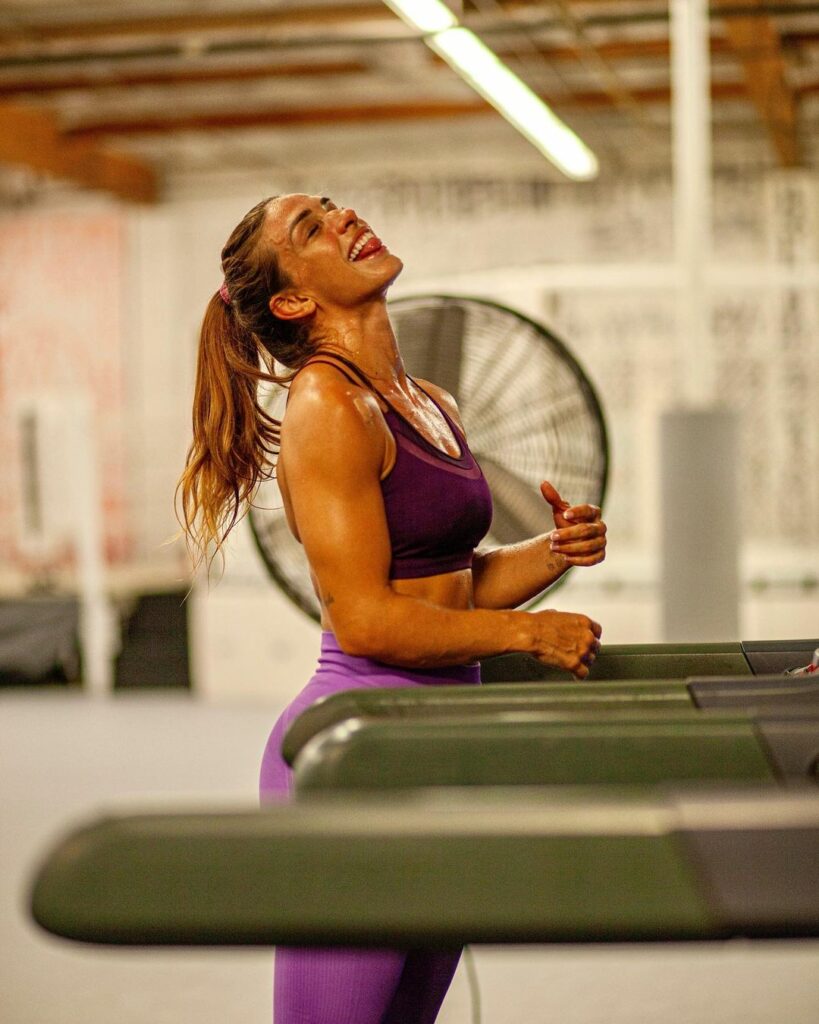 Dern would go on to be frequently featured in the audience of UFC events – and she’d started phasing out her husband from her social media.

Instead Dern has been posting blatant thirst traps in a thinly veiled attempt to grow her following. 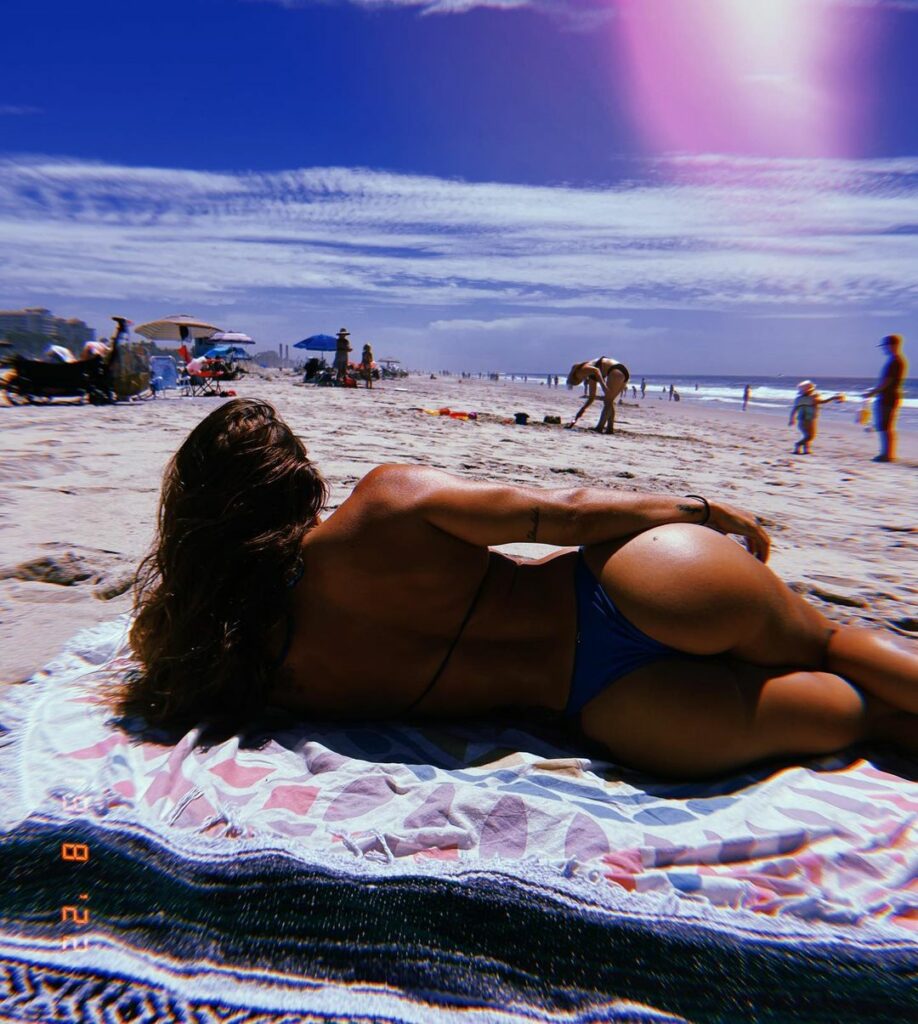 The strategy is clearly working out and Dern has been a hot topic on social media just by appearing in an audience at any given UFC event.

Dern will be headlining a UFC on ESPN card this next weekend against China’s Yan Xiaonan. She last competed at UFC 273 when she defeated Tecia Torres via split decision.

In the video UFC shot to promote the event Dern had a brand new accent to boot.

It’s hard to look at Dern and not see how her career’s transformed through proper management. On one hand, she’s always had both sex appeal and jiu jitsu skills but on the other the public messiness in her personal life was a clear hinderance stopping her from reaching the next level.

Considering the recent success her manager has had in the UFC we can’t help but wonder if a high profile bout against Rose Namajunas or Carla Esparza is far.