Irving was the target of criticism after he shared a post promoting a ‘documentary’ movie that featured an assortment on historically inaccurate claims including Holocaust denial.

Irving promoted “Hebrews to Negroes” a 2018 movie adapted from the book of the same name. Some of the ideas Kanye West recently expressed in his interview with Lex Friedman coincide with the themes of this movie.

The movie is a three-plus-hour effort to “prove” the Black Hebrew Israelite belief that certain people of color, including Black Americans, are the true descendants of the biblical Israelites.

Irving then got suspended from competing for at least 5 NBA matches by the Brooklyn Nets. He was also forced to make a formal apology on his Instagram account. And under this apology post, Kyle Boehm made his now infamous comment.

“I am aware of the negative impact of my post towards the Jewish community and I take responsibility,” Irving said in the statement. “I do not believe everything said in the documentary was true or reflects my morals and principles.”

ADCC veteran shared his comments on social media. This was quickly spotted by bjj fans across the globe prompting for a reaction from many BJJ promotions.
In direct response, Boehm got stripped of his Polaris heavyweight world title due.

Polaris Pro Grappling recently announced through their social media that Kyle Boehm has just been stripped of his title. Boehm originally won the Polaris heavyweight world title against Silviu Nastasa, where they competed at Polaris 20: Squads 3 back in August of last year.

Not just that, the 35-year-old also got permanently banned from competing at Polaris Pro Grappling. The organization announced it on its Instagram story.

“We were recently made aware of comments made by Kyle Boehm on social media that are not in line with Polaris’ code of ethics. In response to Boehm’s actions. We have stripped him of his Polaris title and he will not be invited to compete in our promotion again.” The organization wrote. 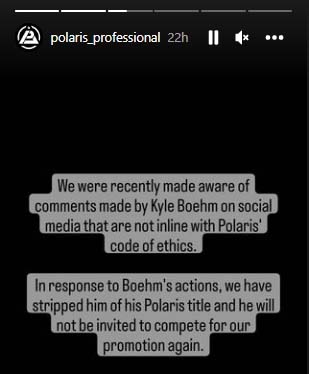 Boehm has represented 10th planet during the entirety of his prograppling career. For those unaware, 10th planet is the affiliation run by Joe Rogan’s best friend Eddie Bravo.

Bravo too was caught in some youtube conspiracies in his day. He famously had a playlist on his youtube channel of content from other creators that was disseminating similar ideology. 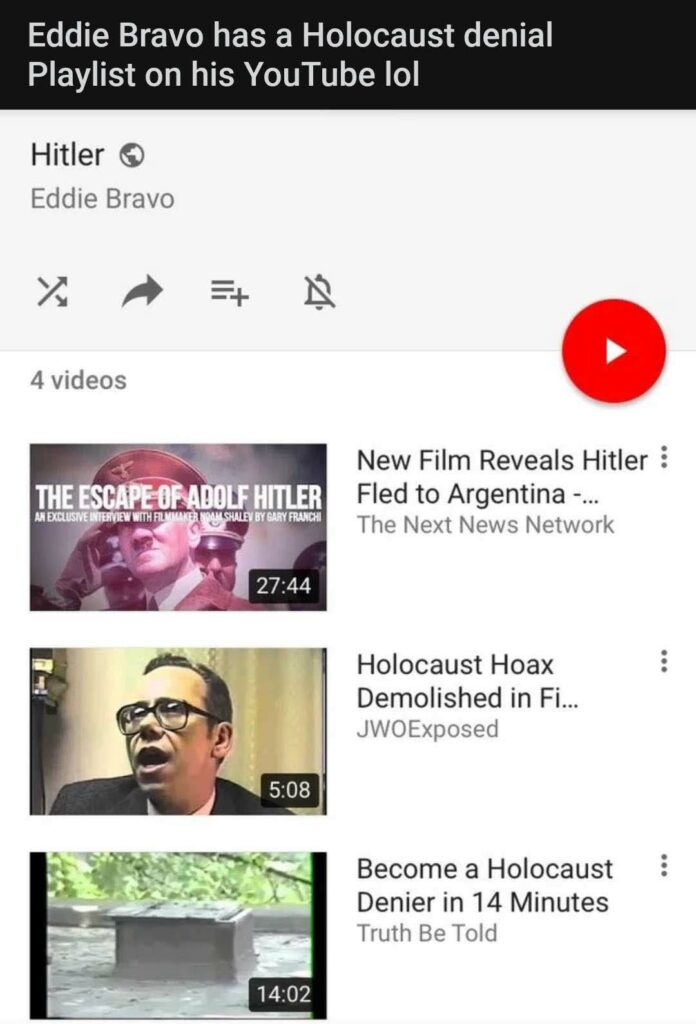 Considering the lack of accountability in bjj community it’s doubtful Boehm stands to face any real repercussions. His instructional are still getting sold and most invitationals will likely still invite him and never even address the outburst.

Regardless of how you feel about the history, it’s baffling to see historical facts denied.