A week after Covington defeated Jorge Masvidal in the octagon, at UFC 272, Masvidal ambushed Covington in front of a Miami steakhouse. Following the incident, Covington pressed charges. Now the images have surfaced online.

Covington can be seen sporting a chipped tooth and some redness on his right cheek. This was later descried as ‘brain damage’. In addition to the injuries Covington is also seeking Masvidal cover $15,000 in damages to his Rolex watch. 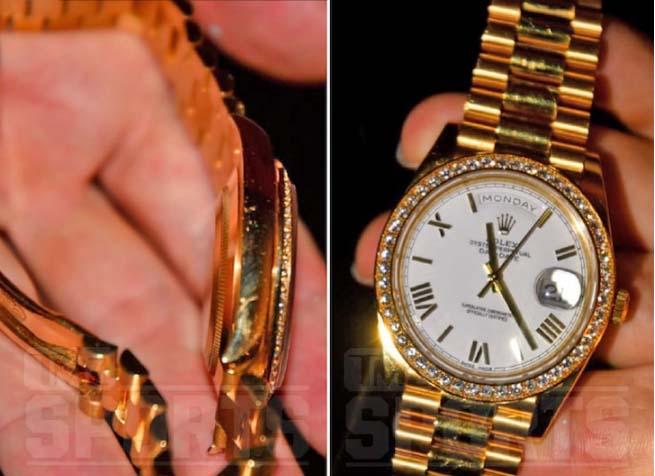 TMZ Sports obtained photos of Covington’s face and Rolex, taken immediately following the incident. Covington previously invoked Marsy’s law – a law designed to protect the identity and dignity of victims in order to be able to sell these images exclusively. If he hadn’t pursued these legal protections, Police officers body cam footage would be available online.

Former friends and training partners turned to bitter enemies inside and outside of the octagon. Masvidal’s lawyer contested the evidence presented and questioned the authenticity of the watch.
“Interestingly,” Cohen wrote of the pictures in the docs as per TMZ, “the images do not demonstrate an injury aside from a small chip in [Covington’s] fake tooth.”

The MMA community seems to be divided with Khabib Nurmagomedov calling for a boycott of Covington:

“If you are stronger than someone inside the octagon, it does not mean that you can insult his children. No one has the right to insult someone’s family. Once you have gone down this path, then be ready to back up your words. ”

Meanwhile UFC commentator, Joe Rogan, believes the incident shouldn’t have happened at all. In his mind, Masvidal should have accepted defeat and moved on:

“I feel like, at a certain point in time, you gotta accept what happened.”

While Covington would like to face Dustin Poirier next, Dana White declared he wants him to duke it out with Khamzat Chimaev. Covington is reportedly negotiating a better contract with the UFC considering that Masvidal vastly out earned him for the UFC 272 bout – but that’s what happens when you fire your agent.

Masvidal is looking at felony charges and considering his prior criminal history might face serious challenges.