Paulo Costa was not happy heading into UFC 278 weigh ins. According to Costa, his sleep was interrupted by USADA who opted to blood test him at 6 a.m. on Friday, during the process of weight cutting.

Taking blood from a water depleted athlete is definitely eyebrow raising for anyone who knows how hard it is to weight cut. Not to mention that Costa is pretty huge for a middleweight and many speculate that his ‘natural’ division is actually light heavyweight – 205 lbs.

Paulo Costa has retaliated yelling out USADA during weigh ins – all while carrying a mock bottle of ‘secret juice’.

Juice is a well known euphemism in the world of pro grappling and lifting for – well juicing ie using PEDs.

Costa will face Luke Rockhold at UFC 278 on Saturday. Costa is not the only one to have grievances against USADA, earlier this week Kamaru Usman protested about an early wake up call he received from them.

“Dear USADA there’s a reason u make us fill out our whereabouts. So U know where we are at all times. Disrupting our sleep at 5am is just plain stupid. Next time I’ll make you guys follow me around all day” Usman wrote on twitter.

Dear @usantidoping there’s a reason u make us fill out our whereabouts. So U know where we are at all times. Disrupting our sleep at 5am is just plain stupid. Next time I’ll make you guys follow me around all day 😒🤬

Both Usman and Costa have long been among the fan picks for alleged PED use. Usman has adult onset acne on his back, prominent traps and stomach rashes. Meanwhile Costa is looking rather giant and experiencing hair loss – which he then counteracted by getting a hair transplant.

Athletes in the USADA program must notify USADA of their whereabouts so that the organization can find them for out-of-competition testing. Costa, who successfully reached the weight limit for his middleweight match against Rockhold, has lately vented his or her anger at the anti-doping organization. 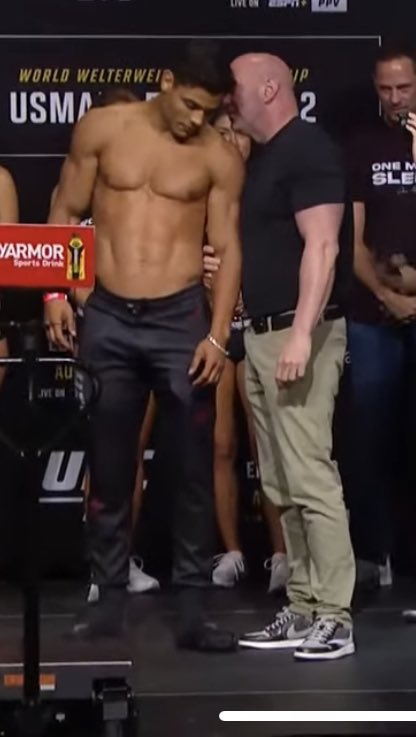 This is the same beverage he had before stepping on the scale on Friday morning. He has never failed a test throughout his time in the UFC.

Rockhold makes his UFC 278 comeback after a three-year absence. In a recent interview with The Schmo, he discussed Costa’s juice stunt:

“Secret juice, that’s always the recipe for a lot of these guys. They’re always trying to find that secret juice.” 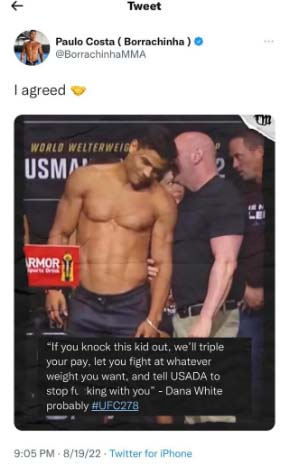 “ You know, I just rely on hard work and a lot of water, focused effort, and we’re going to show him what kind of juice it takes.”

Rockhold and Costa are both winless in more than three years. A victory on Saturday would likely result in a new contract for the victor and UFC release for the loser. Costa is confirmed to be on the last bout of his contract.