Khamzat Chimaev has been in the spotlight for quite some time now. He has had an impressive run in the UFC and managed to beat  all six of his opponents in the UFC.

Chimaev has slowed down considerably since he first broke out on the scene.

His performances haven’t been the only thing keeping him in the spotlight. Chimaev became quite the trash talker who has been instigating a number of UFC Welterweights and MIddleweights.

Yesterday, Chimaev released a video, in which he claimed that nobody wants to agree to face him at UFC 285 in March.

“Gonna fight somebody. I don’t know who. They change your opponents all day, all the time. So, every week, it has new opponents. But nobody want to fight. The guys speaks a lot of trash talk, a lot of about me…When it comes to the fight and sign the contract, they want to run away. I’m always ready. We’ll see what’s gonna happen now…I just wanna fight, give me somebody. If the guys run away from me, just give me someday.”

This didn’t sit well with Paulo Costa who didn’t flinch when he crossed paths with Chimaev at the UFC PI. Costa was accompanied by Jake Shields and released video of the encounter that seems to prove that it was Chimaev who stepped back from escalating contact.

Costa took to social media and expressed his disbelief saying

“Nobody believes on your bullis**t’s anymore lol.” 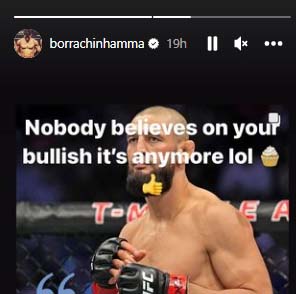 Costa wasn’t the only contender who refuted Khamzat’s claims.

UFC welterweight contender, Belal Muhammad, also called him out. Muhammad has been lobbying to be matched with Chimaev for ages despite the lack of interest from UFC. Muhammad was branded a boring decision fighter and had only gotten a finish in his last one, against Sean Brady at UFC 280.

“The four opponents that said no were Nick Diaz, Tony Ferguson, Brett Hart and Chris Leben.”

Chimaev seems to be playing the PR game in order to get matched with UFC middleweight champion Alex Pereira who has a clear deficit in wrestling despite his ginormous stature. Pereira also has limited experience in MMA so his dethroning of Adesanya created quite a stir with a number of athletes looking to see if they can jump the queue and get away with the UFC Middleweight title.

White has long claimed he’s targeting Chimaev and Colby Covington but there’s no word from any of them about a potential match up.

The only person hinting that Chimaev can even make 170lbs again is his coach Andreas Michael who insists it would be a breeze if they were given enough time .