USADA appears to be stepping up their game. Earlier last month we reported on the fact that the organization was testing Jiri Prochazka repeatedly. Prochazka had been tested 15 times just in October of 2022. That’s a total of 51 tests in a single year.

Apparently Prochazka isn’t the only one who is getting spammed with test requests.

UFC middleweight top contender Paulo Costa has been vocal about USADA showing up on consecutive days at 5 AM at his home and requesting samples. 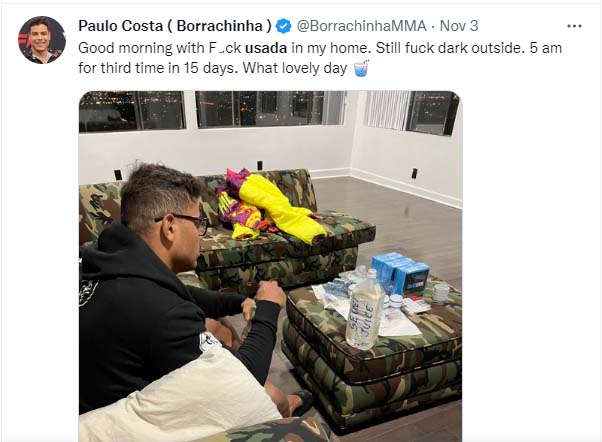 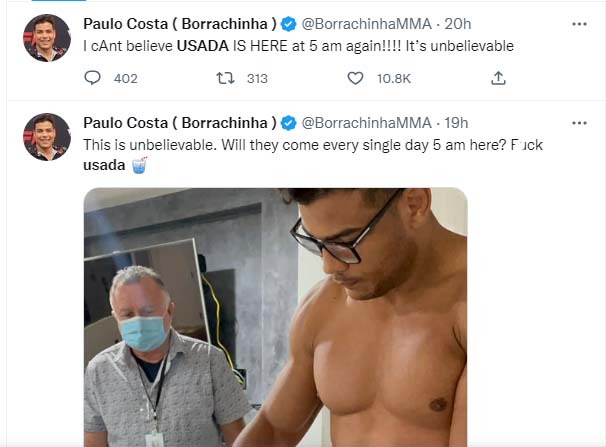 Costa even expressed a belief that UFC is influencing USADA into increasing the number of tests he has to undertake due to contract renegotiations.

“Imagine if some UFC guys could send the USADA [to my home at] 5 am [on] repeated days to annoy [me] since you’re a few months away from finishing and you don’t want to renew their miserable contract. But that’s just a delusional thing, don’t mind.” Costa wrote. 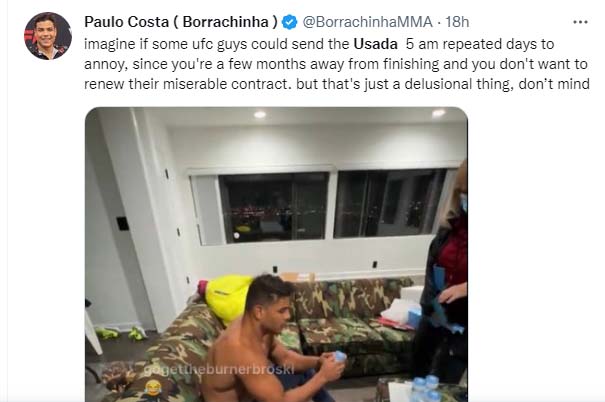 Paulo Costa has been with the UFC since March of 2017. Prior to that he was in Wallid Ismail’s Brazil promotion.

Costa shared how his negotiations went a while back saying he too was on a $10,000 to show plus $10,000 to win contract initially. He added his first contract was for 4 bouts but after 2 knockouts UFC called him to extend his deal.

“When I signed up with the UFC, I got the regular contract – I think 10 To stand if you win, after that the second one is 12 to stand (*show) and then 14 and for you know, so I signed for four fights. ”

“After fight (against Oluwale Bamgbose)… UFC called me to renew my contract.”

Costa wouldn’t agree to 20 plus 20 and UFC was reluctant to up the offer opting to see how Costa fares against former champion Johny Hendricks.

“I beat him and say Okay. (UFC say) so let’s pay you 50 plus 50. So that’s better. But I think we can push it up more. And and what I told about Ismail, (he) is be more conservative. He say is a good good agreement, so I sign”

Costa’s disclosed purse for his performance against Luke Rockhold was just $60,000 to show and $60,000 to win as opposed to Rockhold who got $200,000 just for show. To put things into perspective, Costa competed for the title against Adesanya making less than $100,000 for headlining a PPV card. If this isn’t absurd, we don’t know what is.

While UFC and USADA are independent organizations it’s hard to overlook the fact that USADA hasn’t caught any big names in forever. And arguably the biggest name ‘caught’ for EPO wasn’t even caught by USADA – TJ Dillashaw was caught by New York State Athletic Commission.

Costa’s co-main event at UFC 278 more or less overshadowed the main event between Usman and Edwards so it’s hard to argue that he has no appeal. He’s also clearly one of the most engaging personalities in MMA.

And here’s where it gets interesting – the USADA’s official website doesn’t have any tests logged for Costa in 4th quarter of 2022. It could be a backlog – and it could also be some sort of an elaborate prank.

@BorrachinhaMMA hey Paulo, do you know your November tests aren't logged on USADA site? We were covering your latest post and noticed this. pic.twitter.com/l7tE5dXA3V