Usman Nurmagomedov defeated Patricky Pitbull during their clash for the lightweight title at Bellator 288. While the brunt of attention was focused on Nurmagomedov and his association with his infamous cousin, there was actually a huge issue in the background.

During the event, Usman Nurmagomedov viciously sliced Patricky Pitbull above the eye.

After the event was over, the former champion was unable to get  medical assistance on site and had to instead go and wait at a hospital to get the cut stitched up.

After the altercation, Patricky’s brother Patricio Pitbull tweeted that his brother was still in need of stitches more than five hours later. 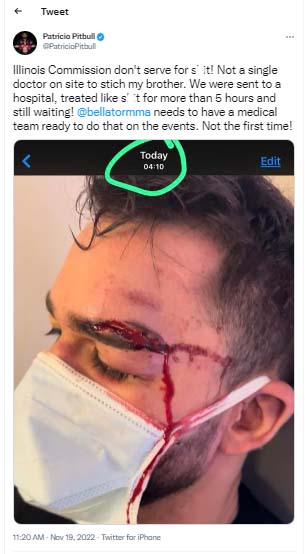 Pitbull tweeted, “Illinois Commission don’t serve for s**t! Not a single doctor on site to stich my brother. We were sent to a hospital, treated like s**t for more than 5 hours and still waiting! @bellatormma needs to have a medical team ready to do that on the events. Not the first time!”

Additionally, he asserts that neither Illinois Athletic Commission nor Bellator promotion did anything to help with the issue. He also added that this wasn’t the first time Bellator had no medical assistance on site.

Considering that Bellator is likely 2nd biggest MMA promotion – and is owned by a huge media conglomerate that is Viacom this kind of an oversight is all the more glaring.

Pitbull isn’t a sore loser, he made it a point to congratulate Usman on social media writing:

“Congratulations Usman, you have great talent.

I was too cautious and wasn’t myself in the cage last night. Never got into gear. It won’t happen again.

Next year starts the Lightweight Grand Prix and I will claim the title and the prize. Write that down.

Thank you to everyone who’s been with me and want to see me succeed.”