Paddy Pimblett is trying to lose over 20 lbs before his London bout this month. However, his recent indulgence in high-calorie foods is starting to catch up with him.

Pimblett is one of the most intriguing prospects in the UFC. He has already defeated both of his opponents in the first round while entertaining spectators with his antics inside and outside the cage. 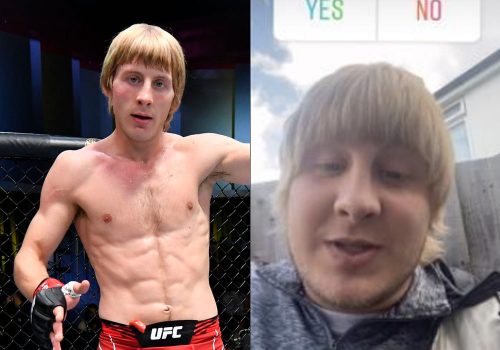 However, he has come under fire for gaining a significant amount of weight between bouts as a result of weeks of binging on fast food.

The former Cage Warriors featherweight champion now fights at lightweight. After his sugar binges, he has to make a massive cut to go to the 155-pound limit.

The height of his vacation also included a trip to America. During this time, he hit the scales at 205 pounds. This is 49 pounds more than he is permitted to weigh in for a fight.

Pimblett spoke with football great Gary Neville on his Sky Sports program The Overlap. He revealed that he still has over 20 pounds to drop before his next fight.

Molly McCann is a close friend and training partner of Pimblett. He joined him and claimed that allowing his weight to rise so noticeably between bouts is not improper.

Regarding his and McCann’s weight loss efforts, Pimblett noted:

The growing star often declares that his subsequent battle will be the one in which he maintains his weight-cutting form. However, that seldom happens. Pimblett travels regularly and struggles to maintain a healthy diet.

Neville asked Pimblett whether the changes were sustainable. Neville was a top-level athlete during his football career.

Pimblett said : “I might grow up a bit more and actually keep my weight down a bit. I was in America drinking gallons of Coke every day, eating 7,000 calories a day, easy.”

“The Monday after my fight I got home and I just went for scrans the next day. I went for Nando’s and then I was just eating chocolate all day.”

“I counted my calories and I ate 11,000 calories the Monday after I fought. That was without trying, my cheeks were all like [puffed out]. I’ll do 5kg overnight, I’d do 10lb in a bath overnight.”

“We get put in a bath hot, like a sauna, it’s not a nice bath, it’s roasting and when you get out your skin is red. You lie on like a towel as well with sleeping bags, they wrap you in a quilt and you lie there and carry on sweating and you just repeat and repeat until you make weight.”