Jake Shields has had an interesting transformation through the pandemic. One known mostly for his martial arts skill, nowadays he’s more of an conservative influencer of sorts.

While Shields sounded pretty down to Earth in his recent appearance on the Joe Rogan experience – he showcased another side of his personality on twitter.

Shields has been dabbling in conspiracy theories of sorts and his latest concerns the HIV virus.

On May 7th. Shields went on the following tweet spree: 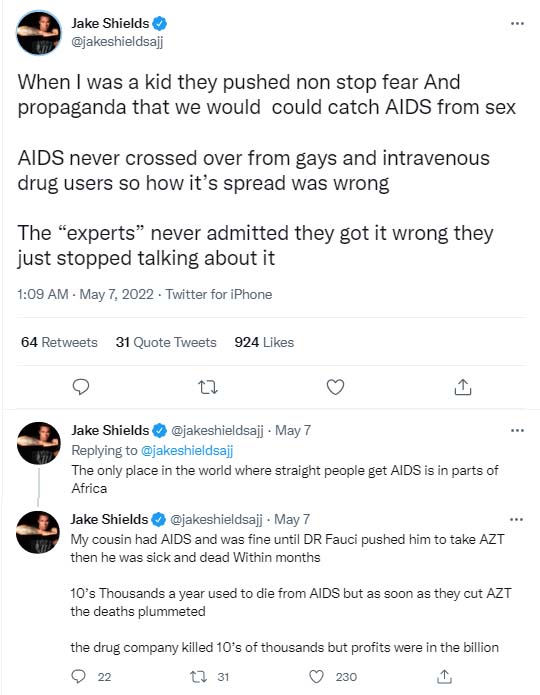 The general response to Shields’ revelation has been jokes about CTE and damage suffered during the course of his mixed martial arts career.

Shields has been active on the MMA scene since 1999 and has had 33 wins, 11 losses, 1 draw and 1 contest. He’s last competed in MMA back in 2018. Ever since, he’s been active on social media and occasionally in jiu jitsu.

Shields was particularly taken aback by the political climate in San Francisco where he resided for a number of years along with his daughter.

While Shields has a variety of right leaning takes he’s actually a life long vegan and has been a part of the Diaz brothers crew for ages.

Shields’ new found infamy dates bac to 2017 when he aided a bystander at an anti Trump rally.

Shields’ controversial takes on HIV date back to April but they didn’t really grab any attention up until recently.

This lie was first spread by Dr Anthony Fauci

A lot of Shields’ skepticism about AIDS/HIV seems to be related to the fact that Anthony Fauci had a significant role in how the US handled the virus when it first appeared.

Of course – Shields’ statement is wrong and as per a number of scientifically verified research papers – HIV does spread with intercourse. The odds of it spreading vary depending on the type of intercourse one practices.