ONE Championship atomweight Victoria Lee passed away at the age of 18. Her sister Angela Lee confirmed Victoria’s death on Saturday. This was after it was formally revealed by the Valley of the Temples Memorial Park and Funeral Homes in Kaneohe on Friday. She passed away on December 26 in Hawaii.

The reason for Lee’s passing is unknown.

“On December 26, 2022 our family experienced something no family should ever have to go through. It is incredibly difficult to say this … Our Victoria passed away. She has gone too soon and our family has been completely devastated since then.”

At ONE on Prime Video 6 on January 14 in Bangkok, Victoria Lee was supposed to compete against against Zeba Bano in her fourth professional bout. Victoria Lee made her professional MMA debut in February 2022. She defeated Thailand’s Sunisa Srisen via rear-naked choke submission.

In less than four minutes in her second match, Lee submitted Chinese opponent Wang Luping with an armbar. Two months later, she returned to the ONE Circle for her third match. She defeated Brazilian Victoria Souza by first-round TKO.

“Victoria was the most beautiful soul who ever lived. She was the best little sister in the world. The best daughter, the best granddaughter and the best auntie.”

“We miss you so much sis. More than you could ever realise. We’re all broken. Because a piece of you was in each of us and when you left, those pieces were ripped out of us. We will never be the same.”

“Each and every little thing makes me think of you. From the sun rays, to the sunset. You taught us to see the beauty in the simple things. You were our bright light. Our sunshine. And that will never change. You were perfect in every way. The best person I knew. The most beautiful girl, inside and out.”

“We love you Victoria. I love you Sprout. Until the end of time.”

“Please give our family grace and respect during this most difficult time. And please, check on your loved ones. Keep checking on them. Give them hugs and tell them how much they mean to you. You just never know.” 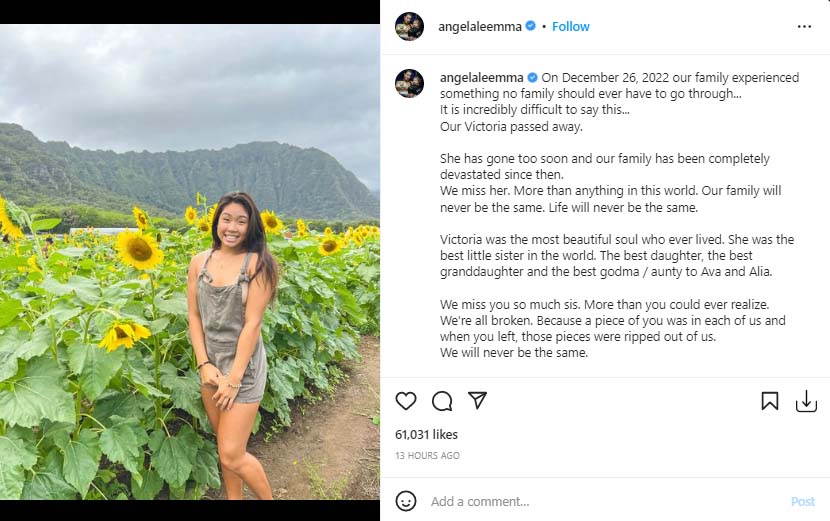 Official cause of death hasn’t been released. Our thoughts and prayers are with the Lee family.