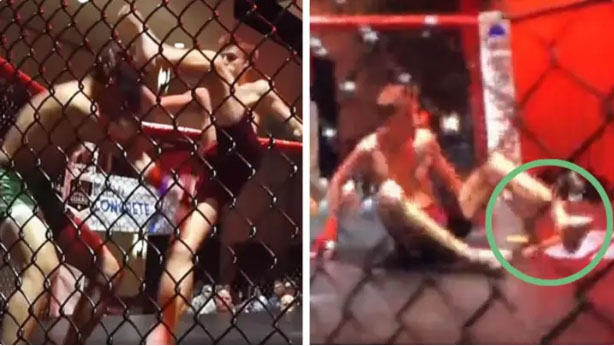 An unforgettable incident happened during the fight in an amateur promotion called Captains Fight Club in North Dakota. Kiskila was successful in getting the victory over Duque with a brutal head kick. He went for the combination to finish but unfortunately, his leg gave up. You can imagine from this incident that how demanding and cruel this sport can be.

It is still unclear whether his leg was broken before or after the hit. But in the video, which is being circulated over social media, it can be assumed that he may have suffered a fracture during the kick. When he went for the finish, his leg couldn’t carry the impact and it collapsed.

According to Kiskila, his “shin literally wrapped around [Duque’s] head.”

He was not able to celebrate his victory. The most memorable moment was shortly turned into a nightmare. He was extremely calm when he found out that he snapped his ankle. He signaled toward his corner and informed his teammates that his leg is finished. According to MMA Fighting, it is being said that he has suffered the same injury which sidelined Conor McGregor in the Trilogy vs Dustin Poirier. Kiskila suffered a broken tibia on the kick he landed.

It will be a long recovery process for Dylan Kiskila. A better video is being shared by the promotion on their Facebook. You can feel the intensity of that kick in the video. Injuries like that can turn out to be career-ending.