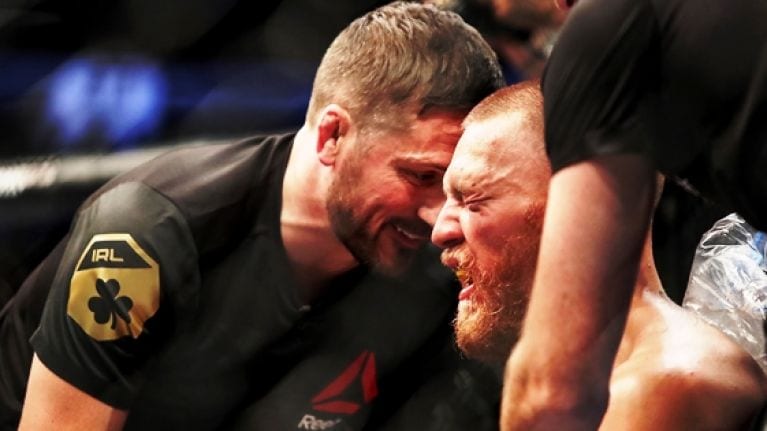 Many people in the MMA community believe that Conor McGregor’s biggest limitation comes from hanging with SBG Ireland’s John Kavanagh. In a quick time period Kavanagh’s captured the reputation of the biggest mcdojo guy among legitimate trainers. This criticism is not exactly welcome.

McGregor was last beaten at UFC 264 this past July and Bisping wasn’t having any of it.

Bisping called for Kavanagh to be cut from McGregor’s team after the interview, telling BT Sport that he should be “fired immediately”.

Now before we get into Kavanagh’s response it’s important to note that both McGregor and Kavangh believed the 2nd fight was going in their favor before the faithful catastrophic leg break.

A simple look at the official statistics displays a wildly different message. Poirier managed to land 36 strikes before fight was called – and 97% of them went to McGregor’s head. At the same time McGregor landed 27 significant strikes – with only a half of that being directed to the head of Dustin Poirier.

The original plan for team McGregor was to go and try to catch Dustin Poirier in a guillotine.

Kavanagh was recently present at a fundraiser for paralyzed Irish fighter Ian Coughlan when he responded to comments:

“I would take criticism from anybody, that’s very important,” Kavanagh explained.

“I wouldn’t say I was hurt, I wasn’t going, ‘Oh no Bisping said something’, that’s his opinion and everybody is welcome to their opinion.

“I’m always self-critical but if I’m being 100 per cent honest, it’ll be the people closest to me saying something – I have a lot of very honest people around me – that’ll be what makes me really stand up and think.”

“I was asked this on Ireland AM the other morning and I had my research ready,” Kavanagh continued.

“For this quarter that’s just ending we had a 70 per cent win rate; 20 fighters and 14 wins, and that’s going to be right up there with some of the best gyms in the world.

“Our biggest star [McGregor] obviously overshadows everything we do and if he slips then people say the whole gym is terrible.

“Dustin Poirier can go out and lose to Charles, or get finished quicker than Conor did against Khabib, and nobody asks why he’s still with American Top Team or says he has no grappling. ”

“So we’re judged under a different set of rules to everybody else, and that’s fine because we also get a lot of benefits from the 2,000lb gorilla that is Conor.

“We get a lot of attention here, lots of great opportunities, my fight team gets to be involved with big shows.”

“We have a good relationship with Combate Global where we just won the tournament, we have a strong in with Bellator, we have fighters in KSW and we’ve fighters in the UFC.”

“So look, things are looking up and to Bisping I’d say ‘thanks very much for the constructive criticism’, keep it coming and we’ll keep trying to improve.”