UFC divisional rankings are supposedly how the promotion ranks the best fighters in their divisions. However, there were multiple occasion when the rankings and their changes made no sense.

Former UFC interim lightweight champion Tony Ferguson suffered a devastating KO loss to Michael Chandler last month. With the loss, he dropped a spot to No.9 on UFC’s lightweight ranking. 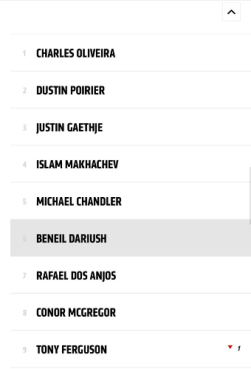 However, many fans pointed out that he’s replaced by Conor McGregor – who hasn’t won since his Cowboy Cerrone fight back in 2020 not to mention that Cerrone is unranked and nearing the end of his career.

On top of everything – there have been a number of reports that McGregor isn’t even in the USADA pool – ie he’d be ineligible to fight in the cage for at least 6 months from his entry into the pool.

This is especially problematic considering that Ferguson may have been defeated but he’s ready willing and able to perform.  Not to mention that McGregor’s one and only win in the division is from 2016 when he finished Eddie Alvarez to snatch the lightweight belt.

It can also be argued that this change is a retribution against Ferguson who had fallen for a fake Dana White quote last week and unleashed a tirade of his own.

“Khabib Nurmagomedov ducked Tony Ferguson for years. But Tony Ferguson is kind of washed now, so there is a good chance he will fight him now,” a troll posted online  (via The Mirror), attributing the quote to UFC president DAna White (in relation to this topic).

There are some points that are often discussed regarding the rankings. The first one is the lack of transparency.

UFC rankings are voted on by an independent panel of journalists from ‘verified MMA media channels’ around the world. However, the panel members are no longer public.

This means that fans don’t know how to judge the credibility of the panel members that make decisions about the ranking.

Besides this, the ranking is also repeatedly criticized as biased and inaccurate. The aforementioned McGregor case is one of them.

Many have claimed that the rankings are based on the popularity of the fighters and can be used anytime to manipulate the audiences. One notable case of this is when Denis Siver was suddenly ranked at No.10 in the featherweight division ahead of his fight with McGregor back in 2014.

More recently, No.3 welterweight Leon Edwards took a fight against the popular but unranked Nate Diaz in June 2021.

All things considered, the rankings appear to be a sham and this latest move does nothing but set up the stage for McGregor to make a comeback against Tony Ferguson.