After seeing success in ameteur boxing, social media star Jake Paul decided to jump into the world of professional boxing.

‘The Problem Child’ has been clashing with popular figures from MMA in order to secure the PPV buys. Jake had 5 matches since 2020 and remains undefeated. Though, a huge drawback is that he never faced an actual pro boxer.

With the same tactic, Jake Paul aimed for a bigger name in combat sports. He took aim at UFC star Conor McGregor who has a huge fan base and never fails to generate PPV buys.

Jake has been yearning to box McGregor for the longest time.

However, McGregor never really addressed his call out.  That is Until Jake Paul appeared on The MMA Hour with Ariel Helwani and discussed a potential boxing match with McGregor. Jake also mentioned McGregor being inactive for the past 12 months.

“I think for me fighting a couple more times, continuing to knock some people out… He has to get active again, who knows when that’s going to happen. “

Jake is certain that boxing him only makes sense if McGregor wants to get another big payday. However, McGregor doesn’t think that way. The 33-year-old Irish took to his Twitter account to slam Jake Paul. 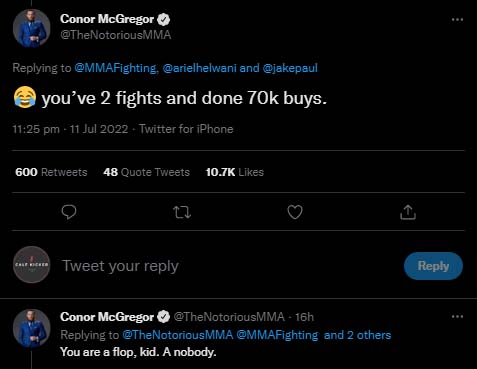 McGregor mentioned a report saying Jake Paul only generated 65,000 PPV buys on his rematch with Tyron Woodley in December of last year. Jake denied the report and claimed that around 500,000 people bought the PPV.

Conor McGregor has fully recovered and will return to the octagon soon. He will compete in the welterweight division and is targeting an instant title shot against the reigning champion Kamaru Usman. McGregor also revealed that he will return to the squared circle later on.

Meanwhile Jake Paul is set to box Hasim Rahman Jr. after the previous candidate Tommy Fury backed out without any confirmation. However, Jake has another trouble after Rahman demands more money and their bout is now in jeopardy.