Back in June a video of a public altercation from Dagestan went viral.

Undefeated prospect Sharaputdin Magomedov was strolling in a mall when he encountered a couple on the elevator.

During the elevator ride, the man starts to get affectionate with his partner in front of him and kisses her. The kiss wasn’t particularly vulgar – by western standards anyway.

Upon arriving downstairs, things got nasty as the man confronted by Magomedov starts punching him. However, Magomedov prevails and throws the man and lands several punches on the ground.

Fortunately, several people separated them to prevent escalating the situation. But Magomedov wasn’t satisfied at all.

‘The Bullet’ then waits for the man outside of the mall. And when he’s about to pass through him, Magomedov sucker-punches him out cold. Not stopping there, he also stomps the guy’s head hard to the concrete while he’s unconscious.

Dagestani Ministry of Internal Affairs showed surprise that the video surfaced 3 months after it was filmed due to the fact both parties had ‘made peace’.

“The events on the video took place on March 15, 2022. At the same time, the participants in the events after the conflict came to an agreement and reconciled; none of them, like eyewitnesses, contacted the police…,”

Magomedov himself explained his actions to Match TV.

“You just need to understand the situation. Makhachkala still has its own unspoken laws, its own morality,”

Sharaputdin Magomedov is 28 years old. He has an MMA record consisting of 11 wins and no losses. He last competed in Thailand at TFC on December 11th.

News of Magomedov signing with Dominance MMA were posted on twitter with the owner Ali Abdelaziz announcing ‘big moves’,

There’s a big discrepancy here. While sherdog lists his record as 11-0, Ali Abdelaziz is claiming 17-0, as is his friendly neighborhood reporter Damon Martin. 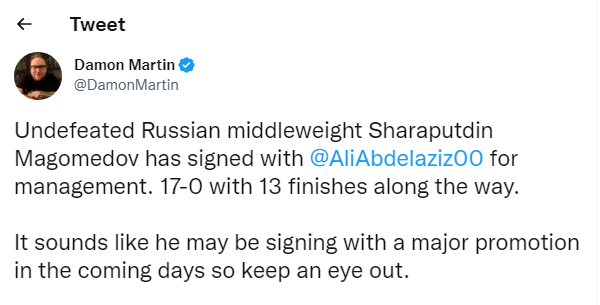 Tapology also seems to be reporting about 17 victories.

Major MMA promotions are not exactly pillars of morality but it would be interesting to see if Magomedov’s violent nature resurfaces outside of the cage again.