Internet celebrity turned boxer Jake Paul had a ferocious Twitter spat with famous UK influencer KSI. The pair got into an altercation after KSI criticized the price of Jake’s PPV.

It was recently announced that Paul’s PPV event against Hasim Rahman Jr will be going for $60. Paul’s boxing bout is part of his Showtime deal. While this might seem as steep – his PPV against Tyron Woodley also went for $59,99. And prior to that Paul’s appearance against Ben Askren went for $49,99.

Recently, KSI took a jab at Jake Paul announcing his PPV price for his upcoming fight against Hasim Rahman Jr. KSI felt like the price was a bit too high.

Jake Paul and KSI had a history together back in 2018. KSI had a feud with Jake’s older brother Logan Paul and decided to settle it in the squared circle. Jake also featured on “the biggest amateur boxing match in history” and faced KSI’s brother Deji Olatunji.

Logan and KSI’s match ended as a majority draw with the third judge favoring KSI. Jake defeated Deji via technical knockout in the fifth round. Despite KSI and Logan having become friends, Jake still occasionally has a heated argument with KSI.

KSI will be facing fellow social media personality Alex Wassabi on August 27 at the O2 Arena. It will be his first boxing match since he bumped fists with Logan Paul in 2018. 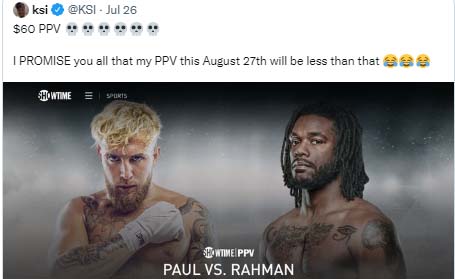 Jake Paul was not pleased with the treatment. 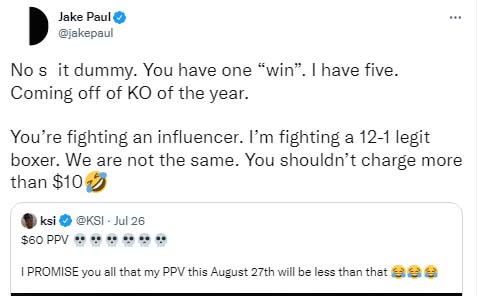 “We are not the same. You shouldn’t charge more than $10.” Jake wrote.

KSI then made fun of another Jake’s tweet where Jake said he will give $1000 to a lucky person who likes and retweets his post.

“Don’t think we don’t see how desperate this looks. No one cares, so you gotta pay to create hype lmao.” KSI wrote.

The pair continued to trash talk to each other to the point that Jake boasted of his income from boxing compared to KSI from Youtube. KSI said he is proud to be a Youtuber and credited the video sharing platform with making him famous, unlike Jake Paul who switched to be a full-time boxer.

“Na you still don’t get it. You didn’t care about the platform that made you who you are. Constantly denouncing it. I never did. I’m happy to say I’m a YouTuber to this day because now I can do/be whatever I want. I’m thinking long term, my guy. You failed at this.” KSI wrote.