Ever since the Paul brothers boxed against British youtuber KSI and his brother Deji, Jake Paul and KSI have been beefing. The two have recently engaged in a heated conversation on social media.

It should be noted that both these Youtuber-turned boxers are quite active in the ring. KSI is facing Faze Temperrr this week. Meanwhile Jake Paul recently beat Anderson Silva and is trying to box either Tommy Fury or UFC vet Mike Perry.

As a result, the chance of these two facing each other is higher than ever this year.

KSI recently had an interview with combat sports journalist Ariel Helwani regarding a matchup with Paul.

In response, Paul tweeted about his efforts to secure a bout against KSI, he said:

“I sent KSI and his team a contract over a month ago. I offered to come to the UK, 185 pounds and 10 rounds. I have been at 8 rounds since Askren. He and his team have yet to respond.”

Paul later mocked KSI and added:
“The offer was/is to come to the UK in December 2023. If he doesn’t respond next week after his show, then it’s going to have to be in the US. The best part is he tells @arielhelwani that I’m hiding behind negotiations when in fact he has yet to respond. Hahaha. ” 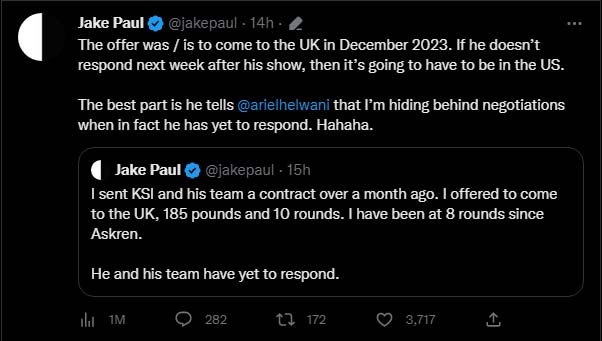 Adding to the trash talk, the two recently went into a full-on argument in a Twitter Spaces voice chat. Jake Paul criticized KSI for not choosing a tougher opponent after Dillon Danis pulled out.

He said:
“That’s what I did when Tommy pulled out-I fought Woodley again.”

The two continued to bash each other by ridiculing the opponents they went against.

“Have you fought anyone younger than 40? Why would I be afraid? You know I would f**k you up.”

Paul responded by calling him out and said:
“If you would f**k me up, how come you haven’t done it yet?

“You came back to act like you were gonna fight me, then when the negotiations happened you got scared. Your ego can’t handle this sh.”

Paul continued by saying KSI was scared of facing him, he said:
“You’re ducking me and you’re scared.”

This conversation between these internet sensations was posted on KSI’s subreddit. This is where even his own fans agreed that Paul won this argument by a landslide.