Alex Pereira became the new UFC middleweight champion after defeating his old kickboxing rival Israel Adesanya at UFC 281. Unlike many other Brazilians in the UFC, ‘Poatan’ doesn’t have a strong base in Brazilian jiu jitsu.

Not long after his 5-round war with Adesanya, MMA journalist Ariel Helwani shared on social media that Alex Pereira just received a BJJ brown belt from his coach. Rising star Khamzat Chimaev was quick to mock Pereira using laughing and facepalm emojis. 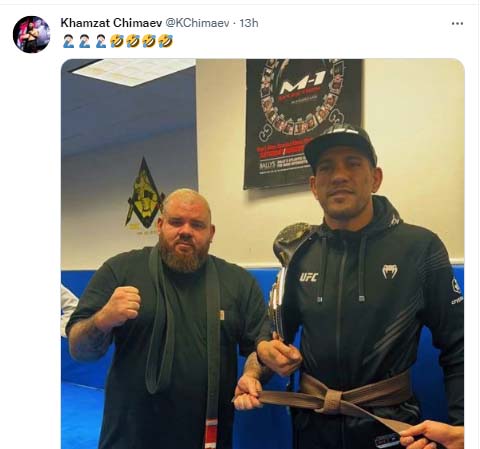 But he didn’t leave it at that.

Recently, during an interview with ESPN, Khamzat Chimaev was asked about his opinion on Alex Pereira who just received a BJJ brown belt. Chimaev was asked whether he was impressed with Pereira’s achievement and he answered with a laugh.

“You think so bro? Just asking you bro, really? He deserves a brown belt after a couple of years? When did he start MMA? Three years ago?”

“I got (started) like five years and I didn’t get that [brown] belt. I mean, how many black [belt] guys have I submitted? I submitted and beat them up? I submitted a lot of black belts in grappling or jiu jitsu. These guys get it [BJJ belts] so easy.” Chimaev said.

The 28-year-old Chechen born believes that he would easily submit Pereira who lacks in grappling.

Bottom line, there’s a number of prominent UFC athletes questioning the authenticity of jiu-jitsu promotions lately. Prior to Pereira getting a brown belt for a performance that featured little to no grappling, Makhachev also questioned the ease with which guys get promoted to black belt.

As is, there’s a big disparity in levels between different bjj black belts.

Volkanovski’s bjj coach also mirrored the sentiment confirming that bjj has fallen quite a bit from its heyday: