UFC legend Khabib Nurmagomedov is an avid fan of football. In fact Khabib even had a test run at a Russian football club after retiring from MMA.

Nurmagomedov also knows a number of huge names in soccer and often plays for fun along with his trainees and friends. He took part in recreational football while in Abu Dhabi alongside Islam Makhachev for his successful title shot against Charles Oliveira.

At one point Nurmagomedov was challenged by a reporter who threatned to stack his team with pro football stars to which Khabib answered his team would have even more star power.

“Brother, I never hear about your team. Okay you bring who? Ferdinand? I’m going to bring Cristiano, Ibrahimovic, I can bring Benzema, Ibrahimovic, Cristiano and Casillas!” Khabib said.

Now Khabib is in Qatar, to check out the action live (and possibly due to his partnership with Qatar airways). 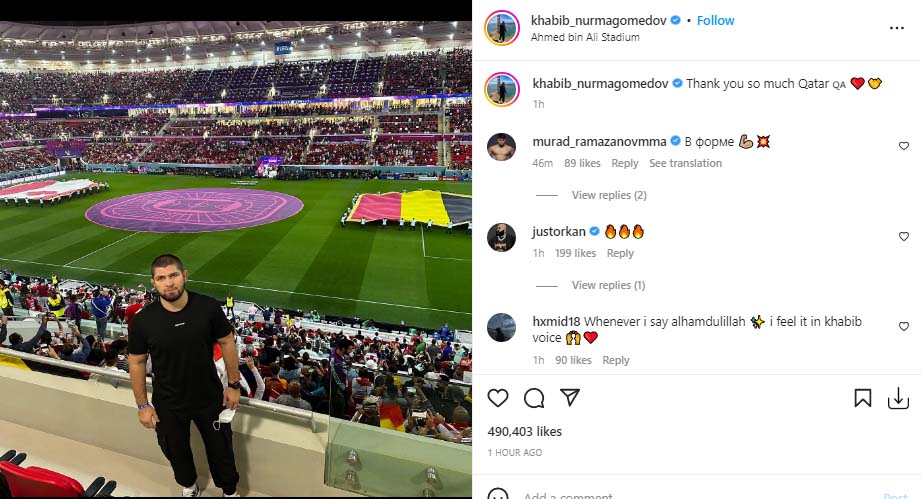 Khabib attended the match between France and Canada and even shared his predictions for the outcome of the world cup.

“This World Cup. I’m going to choose three teams. I think England is going to do very well. I think Brazil, Brazil is very good. And I think [the] Netherlands.”

Brazil’s odds are currently at +300 and they’re the favorites to win the whole thing. England is rating at +650 and has actually become less likely to win since the tournament started.

Khabib was previously active on social media in March of this year when he was spotted anwertng trivia on a football fan account. When the fan account prompted ‘Most Underrated Player’ award, Khabib commented, “Mahrez.”

Riyad Karim Mahrez is a professional footballer who plays as a winger for Premier League club Manchester City and captains the Algeria national team.