Khabib Nurmagomedov shared a video of the knockout on his Instagram account with the caption “Statement,” despite not being in Umar’s corner for the bout.

Raoni Barcelos and Umar Nurmagomedov squared off in the first UFC event of 2023. The Dagestani defeated his opponent easily and knocked him out in the first round. Umar Nurmagomedov is an unbeaten boxer with a stellar 16-0 career record. The 26-year-old is currently on a four win streak in the UFC after his victory at UFC Vegas 67.

The Dagestani previously competed against Sergey Morozov in a bantamweight match in January 2021 to make his promotional debut. In the second round, Nurmagomedov had an outstanding performance and finished his opponent with a rear-naked choke. In addition, he received a $50,000 “Performance of the Night” bonus. 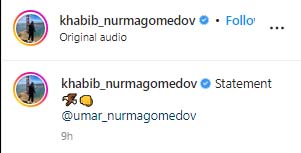 The next bout took place at UFC 272. He competed against Brian Kelleher at featherweight. The 26-year-old defeated his opponent easily once again and submitted him in the first round.

Nurmagomedov dropped down to bantamweight in June 2022 and competed against Nate Maness. Umar was declared the winner by a unanimous decision. The 26-year-old won the competition after receiving scores of 30-27, 30-26, and 30-25 from the three judges.

Khabib Nurmagomedov recently revealed that he will be leaving his position as an MMA coach after assisting Usman Nurmagomedov and Islam Makhachev in winning belts in their respective organizations.

Umar commented on the situation and said that Khabib will continue to assist his trainees with their training in Dagestan. He said:

“We will still train. We will be training together when in Dagestan. Nothing changes like that, we’re brothers… I don’t think he [Khabib Nurmagomedov] can stop, he will still control me and my brother, some other guys, but not the same [way]. He doesn’t want to travel, doesn’t want to come to camps and stay with us for a couple of months… That’s why he make the decision, I’m happy for him.”