In the world of professional sports, stories from the training room are somewhat of a gray area. Often times those who train in jiu jitsu or mixed martial arts frown upon revealing what happens during a training session – which is possibly why Nurmagomedov told  the following anecdote without using any names.

“Yeah, because I know like we grew up together like all our life, and I see how Islam go go with a lot of ADCC level guys even with ADCC champions – they tap.”

“They tap when when they grapple with Islam. I see 88 kilo 99 kilo 77 kilo – I don’t want to say name but they tap – ADCC world champion, you know, and and it’s gonna be big dream fight versus Charles Oliveira in Brazil, finish them on the ground. ”

“Take this belt and go home. I’m okay if they I hear like Charles Oliveira coaches say, Okay, come to Brazil. Fine, no problem, send us location. ”

“We’re gonna come to Brazil. Islam gonna write Charles Oliveira like his horse. We’re gonna take this belt. We’re gonna show them. If somebody was easy, it would be called jujitsu and we’re gonna go on with the belt.”

Through a bit of online sleuthing we discovered that former ADCC gold medalist Yuri Simeoes spent time at AKA working on his MMA. 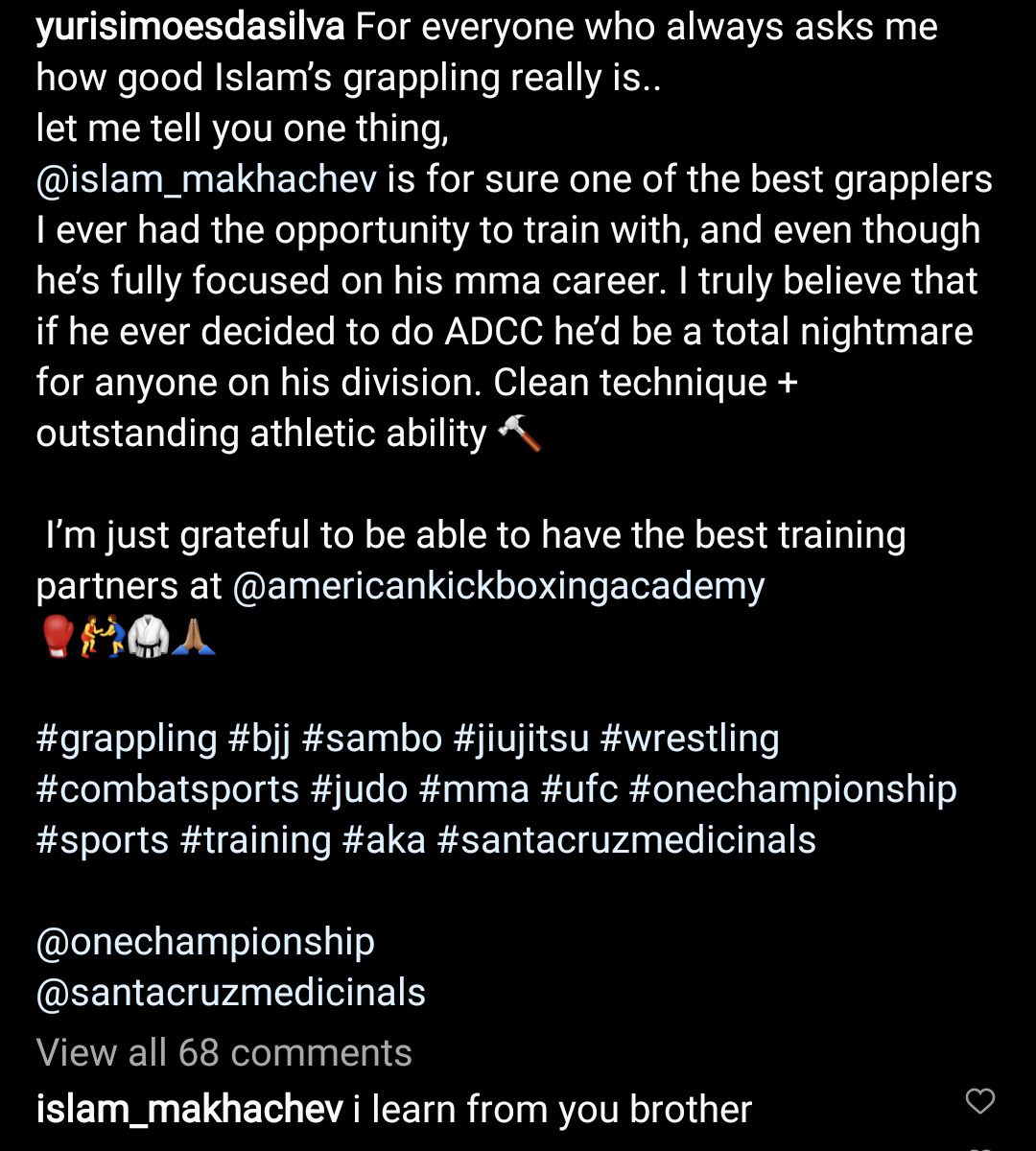 Simoes also had nothing but praise for Makhachev’s grappling – which seems to affirm the narrative.

“For everyone who always asks me how good Islam’s grappling really is..
let me tell you one thing,”

“@islam_makhachev is for sure one of the best grapplers I ever had the opportunity to train with, and even though he’s fully focused on his mma career. I truly believe that if he ever decided to do ADCC he’d be a total nightmare for anyone on his division. Clean technique + outstanding athletic ability 🔨”

The post was accompanied by a clip of them training together.

In a suspicious turn of events, the post that first alerted to this connection has since been deleted.

Yuri Simoes hasn’t had a good time transitioning to MMA – Simoes was 0-2 in MMA when One FC decided to cut him. Considering how shallow the talent pool is in ONE FC that gives great cause to be concerned. Simoes is still on board for One FC jiu jitsu event series according to the promotion.