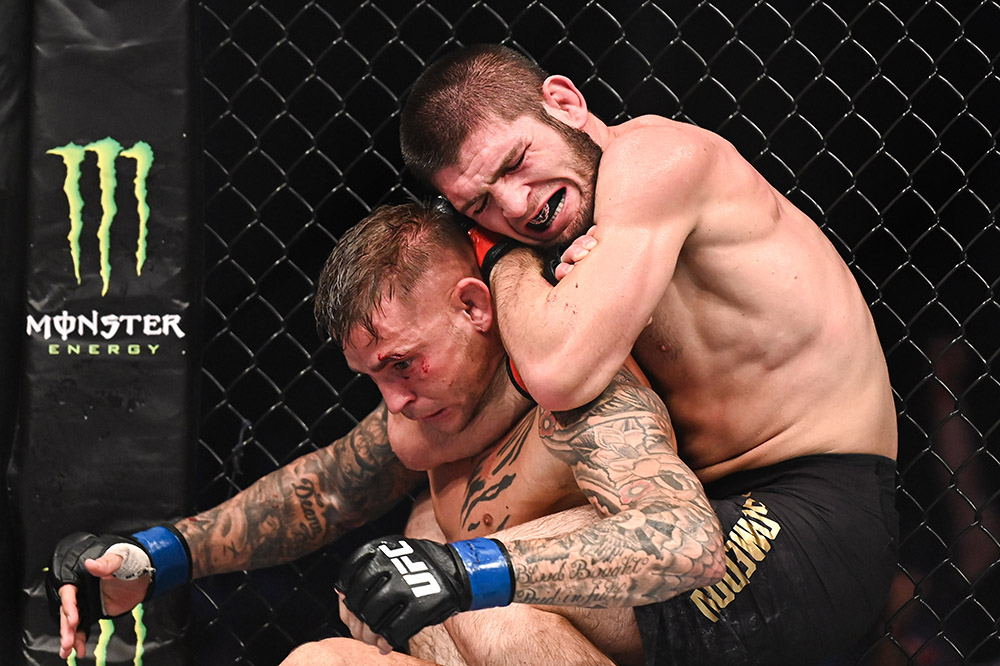 Khabib Nurmagomedov may have retired but his eyes are still firmly pointed at the UFC lightweight division – and according to him it’s all down hill from here for Dustin Poirier.

Poirier recently got submitted in the 3rd round by reigning champion Charles Oliveira. Poirier did solid in round one, but then got ground and pounded into making some bad decisions all throughout round two culminating in a quick submission in round 3.

This is Poirier second attempt at capturing the title – and second failure. He was previously submitted by Khabib Nurmagomedov in a quick showing back at UFC 242 in 2019.

Many rumors overshadowed the fight – including one that Poirier might retire. After the fight Poirier confirmed he won’t be cutting down to 155 lbs any longer.

“After the fight, he said he needs to think, does he need it at all? If such thoughts came to his mind, it means he will win, but he will win and lose,” Nurmagomedov said recently (via Bloody Elbow). “He will not go to the end when it will be necessary. Sometimes, you look at the athlete and see how fast he changes.

“I say it to my close friends. While there is a time you should stay active and keep fighting. If this switch clicks once, he will never go back. I think his switch clicked.”

And Nurmagomedov might have a point – time will get us all. But Nurmagomedov may have gotten ahead of the curve leaving the sport with his legacy intact – and with a pretty solid head on his shoulders.

“The time comes. There was Frankie Edgar, Benson Henderson, [Anthony] Pettis, before me,” he added. “Then Conor… No one stayed, everyone left. Now it is Charles Oliveira’s time. Charles came. Now it is the time of Islam, Beneil, Justin (Gaethje), Charles Oliveira. They will fight now, then they will leave too.

“Others will come. No one can control this and no one will be able to stop this. Time runs (out). I think everything is simple. Charles Oliveira was better; choked and left. Later, another one will come and (beat) him. He will go out, then we will talk about another one. It is such a carousel that will never be stopped.”

Poirier has been busy with other professional endeavors. His hot sauce is a big success and on the wings of that he’s decided to get into alcoholic beverages.

Poirier’s whiskey brand is titled Rare Stash. This will be a collectible bourbon rumored to be available from the 31st of December onwards.

While speaking at the post-fight press conference, Dustin Poirier seemed unsure of what he wanted to do next.

“I can do anything I put my mind to. I can fight for another belt, I can go on another streak, I can claw and climb and get back to wherever I want to be. It’s just, do I want to? That’s the question I’ve got to look in the mirror and answer. Do I want to do it again? Do I want to go down that road again? That answer will come in the next couple days or couple weeks.”