Late night MMA twitter never disappoints. This time it was all about PED abuse rumors and in an unlikely context.

Dominance MMA manager Ali Abdelaziz accused PFL competitors going up against Harrison of abusing PEDs. This is especially hilarious considering PFL does not have a collaboration with USADA.

In the past PFL’s testing mostly relied on Nevada State athletic commission testing – which are in competition tests and as such are more of an IQ test of sorts.

Harrison herself was a target of PED abuse rumors which she debunked.

Kayla Harrison’s manager Ali Abdelaziz accuses former opponents of using PED. The controversial manager had nothing to back up his claims and deleted his tweet.

Former Judoka world champion Kayla Harrison switched her career to mixed martial arts in 2018. The 32-year-old signed an exclusive contract within the PFL and is one of the rare athletes in MMA that are actually getting paid. Disclosed pay alone for Harrison details she was compensated over $500,000.

Harrison competed in the promotion’s seasonal championship and has won the lightweight championship two times with a total score consisting of 15 wins and 0 losses. She is one of the biggest names in the PFL and UFC president Dana White has been yearning to sign her however thanks to her huge contract and matching rights she ended up re signing with PFL after becoming a free agent.

The Egyptian manager is known for his inflammatory takes and toxic behavior towards his clients’ opponent.

Abdelaziz took to his twitter account to boast about Harrison’s incredible performance. However, what comes after is just a blatant accusation. He boasted how good Harrison, a clean athlete, competed against her opponents.

Canadian MMA and kickboxing judge Erik Magraken saw the tweet before it got deleted and expressed how irked he was. 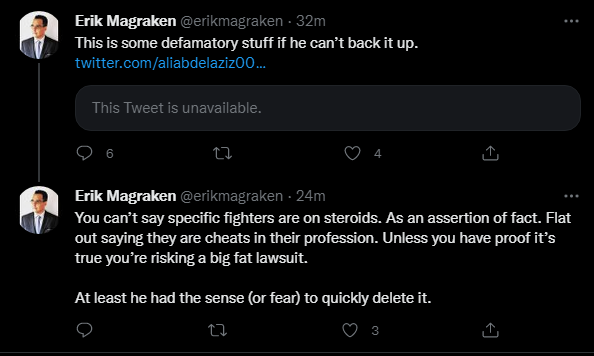