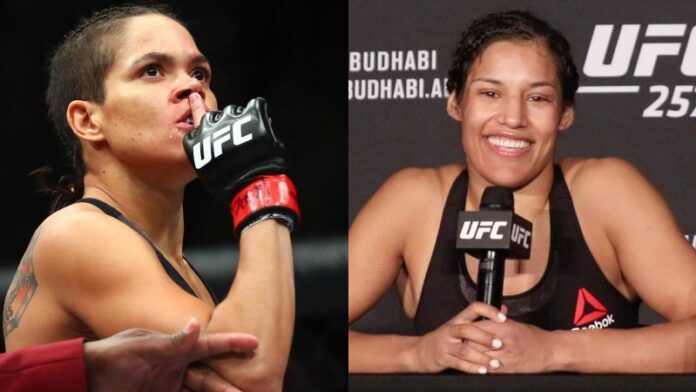 Julianna Pena is set to face the top-ranked P2P fighter, Amanda Nunes for the bantamweight title at UFC 269 on Dec 11, 2021. It will be her first fight after securing a win against Sara McMann via rear-naked choke at UFC 257 this past summer. She is currently 10-4 in her MMA career. Pena has a big hurdle ahead – having to face Amanda Nunes who hasn’t lost a fight since 2014 – and is overall one of the most domineering female fighters around.

But before the fight, challenger Pena opted to share a story from one of her coaches – because according to him female fighters at American Top Team (ATT) are using PEDs. As the story goes – Pena has been there in the gym for training. She trained there for around a week after her win against Jessica Rakoczy in the Ultimate Fighter Team Rousey vs Team Tate.

Pena revealed in the interview with the MMA Hour that there was some shady business going on at ATT. The fight between Pena and Nunes was meant to happen at UFC 265, but it was postponed as the champion tested positive for Covid-19.

She was quoted saying:
“He gave the shrug and starts looking around, but the reality is this guy is in Dana White’s back pocket, and they’re close friends, and so they’re going to make happen whatever’s best for them,” Pena said on The MMA Hour. “They’re very smart and methodical about how they do these things. I think that that’s what it was – whatever works best for them.”

“And Dana’s told me when you’ve done as much for the division as Amanda has, you get away with a lot more and you have leeway in the company, and she has been showing that hand over fist.”

During her stay at ATT, an unnamed coach spilled the secret about female fighters that are allegedly injecting PEDs in their butts in the gym. One noteworthy factor is – UFC was not utilizing USADA services at the time.

“They were welcoming me into the gym, and he was like, ‘The girls shoot themselves in the ass in the bathroom – they do it to each other,’ and I’m like, ‘No, they don’t,’” Pena said. “And he was like, ‘I swear to God, they’re all on st*roids.’ I literally didn’t believe him, and he was literally like shaking me in the head, [saying], ‘I promise, they’re doing it.’

“That was my experience training at American Top Team. But that was pre- [U.S. Anti-Doping Agency].”
It is still unclear that whether this is to point out that the shady business is still happening in the gym or Nunes is still involved in taking steroids.

Lambert casually denied the accusation as he responded with a “LOL” when asked by MMA Fighting.