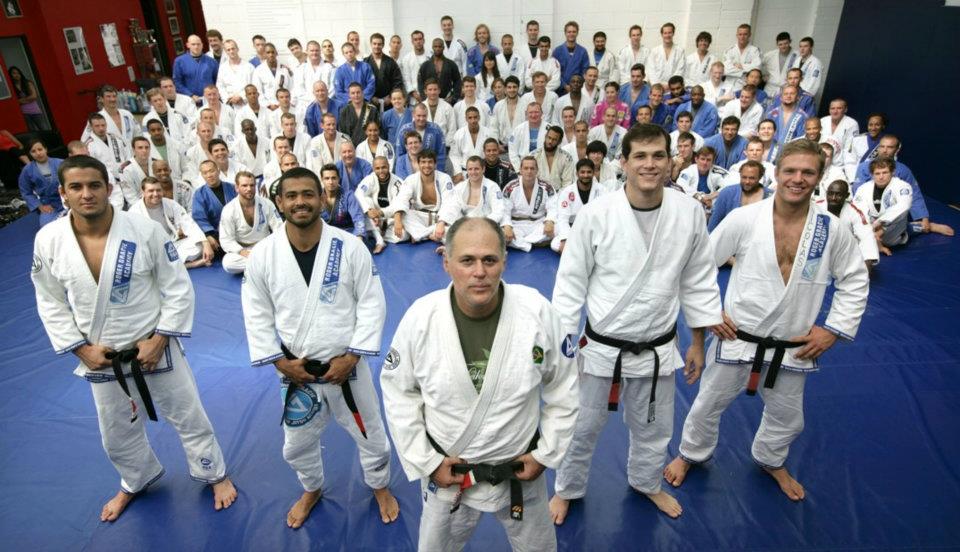 On March 13th of 2021 Rochelle Bachtiari published an explosive account accusing Miad Najafi of stalking her for over 3 years.

According to Rochelle 4 police reports had been filed in the period the stalking is alleged to have happened. These reports were heard in court and ultimately Najafi was given a restraining order banning him from contacting Bachtiari for the next 5 years.

Rochelle says she communicated the contents of the order to her bjj team. But it didn’t produce any changes. Najafi is a black belt under Mauricio Gomes – a respected black belt and father of Roger Gracie.

Rochelle would go on to share an excerpt from her court testimony detailing some of the ways Najafi was abusive toward her. She also shared that she communicated the status of the case and her concerns with 2 black belts at her academy – and yet Najafi was still welcomed to train. 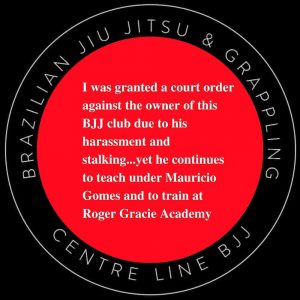 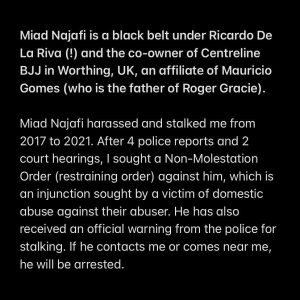 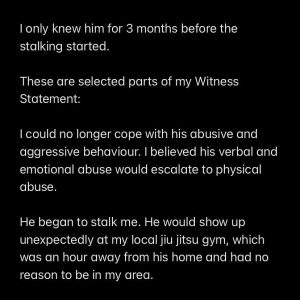 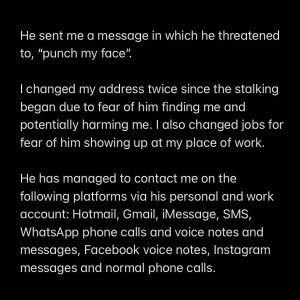 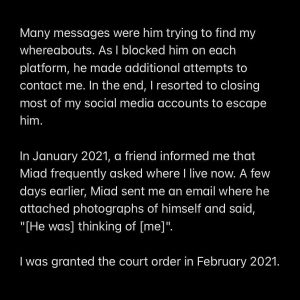 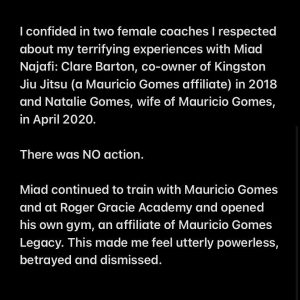 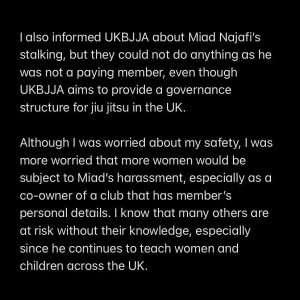 While it’s arguably upto the court to do what is necessary to protect her in this instance it’s certainly interesting that her own jiu jitsu club had chosen to ignore these serious reports and not restrict his access.

Resurfacing of this case, and the scandal explosion in the bjj community has forced Gracie’s hand in releasing the following statement:

In light of recent events in the Jiu-Jitsu community we would like to reaffirm our belief that Jiu-Jitsu is for everyone, and everyone should be able to train somewhere they feel comfortable.

To help ensure that, we will be having all of our instructors and members sign a code of conduct, we will be implementing new safeguarding policies, and setting up an email address monitored by the safeguarding team where members may contact us confidentially to express any concerns they have about their time at the academy.
If you have any concerns about your time at the academy please contact us at:
[email protected]

This seems very similar to the damage Fight Sports tried to mitigate with their initial statement. But it seemed like at least something – that is until Gracie was spotted with the following comment. This comment was subsequently quoted by Rochelle. She also responded to the the statement attached above.

And it’s hard to not see this comment Gracie had made as  simple attempt to avoid liability and basically do damage control.

He’s not the first Gracie to do that either, years earlier Rickson Gracie was spotted training with a man convicted of gross misconduct and had later tried to wash his hands by issuing a Zero tolerance policy. His bjj federation also had several members that were convicted of abusive behavior .

But this case in particular is very interesting. On one hand, it’s possible that the abusive behavior was limited only to the victim – but this still doesn’t excuse her own club being reluctant to protect her – even as the law was on her side. Once again all these issues are less about the law and more about the chauvinist culture because in the eyes of many a value of the agile young man who had applied himself to this discipline seems to trump any infractions he had made – toward their friend, their student, their customer and a member of their community. In the end jiu jitsu seems adamant to value people just on selfish basis, ie what training with this person does for me, as opposed to what kind of an example and message it sends.

It’s hard to not be frustrated with these repetitive cases. And I imagine it’s even harder trying to be a part of community that’s clearly shoving you away every step of the way, it does not value you as a female athlete, as a customer or as a human being.