We’ve previously discussed the public backlash when lackluster UFC 279 card was announced. UFC 279 will be headlined by Nate Diaz against Khamzat Chimaev.

But initially the card lacked star power outside of the supercharged main event.

MMA veteran Chael Sonnen blasted the pay-per-view in his remarks. He said: “I do not know a single human that’s on the card… Why is that? A pay-per-view with no number one contender’s bout and no championship match… If they lose their main event, you lose the entire event which would come back to what I was going to say about Jorge Masvidal, to put him in that position. Jorge appears to be wanting to fight and he’s not getting one. Masvidal is a massive star and he’s not getting matched up.”

UFC had heard about the backlash and Dana White was quick to add that the promotion was working on more events to add to the card.

Since then, only one significant match up was added – Tony Ferguson’s welterweight debut.

This past weekend White announced:

Tony Ferguson vs. Li Jingliang in a welterweight is confirmed for UFC 279 on Sept. 10 in Las Vegas however this news hasn’t had a chance to do much for ticket sales – yet. Which is what Jake Paul jumped on.

“damn Dana White…looks like u can’t sell tickets in ur own hometown of Las Vegas for UFC 279? Not only do u hold Nate Diaz hostage. Not only do u put him up against a terrible opponent stylistically. But u create the worst PPV card of the year to honor this man? ESPN even on u” 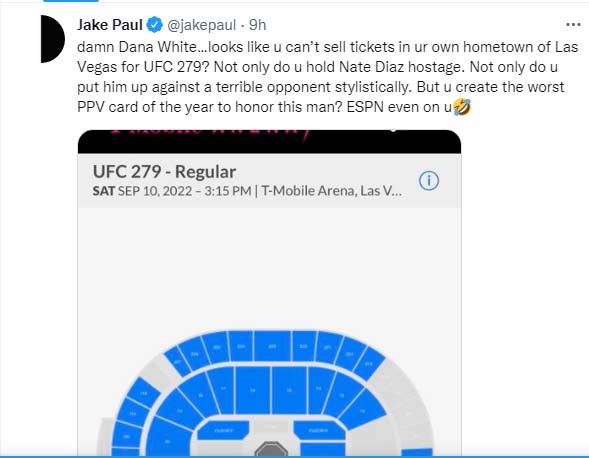 Regardless of that, it’s truly absurd that UFC will be trying to make the fanbase cough up $74.99 for a main event of Diaz vs Chimaev and nothing else. Story developing…