Jake Paul thinks Dana White is attempting to “hurt” the outcome of his October 29 pay-per-view match with Anderson Silva.

The renowned former UFC middleweight champion Silva is scheduled to box the YouTuber-turned-boxer in Arizona the next week. Additionally, Paul thinks White has made an attempt to obstruct the marketing of the bout as he seeks to secure a respectable pay-per-view performance for his first fight of the year.

Paul and White’s spat began as a small-scale conflict. But things started to take a turn for the worst when he started criticizing the UFC president over things like athlete  compensation and started pushing for the formation of a union for combat sports. 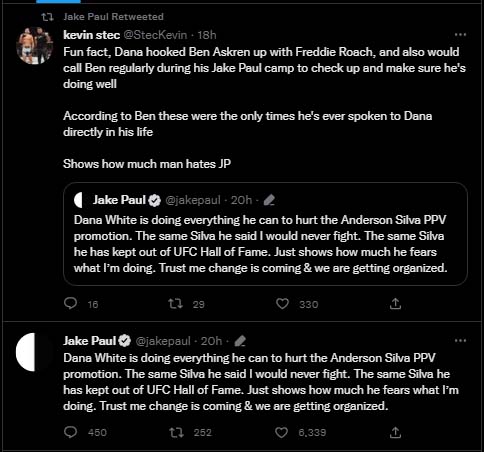 Paul tweeted: “Dana White is doing everything he can to hurt the Anderson Silva PPV promotion. The same Silva he said I would never fight. The same Silva he has kept out of UFC Hall of Fame. Just shows how much he fears what I’m doing. Trust me change is coming and we are getting organised.”

Given that White has no influence with Showtime Boxing, the organization responsible for broadcasting the bout, or the Arizona venue, it is unclear precisely what Paul believes White has done to obstruct the match. He hasn’t spoken much about the whole situation and has urged the media to avoid bringing it up during UFC press conferences.

Silva will be a challenging opponent for Paul. In the last year and a half since switching to boxing, the Silva defeated former world champion Julio Cesar Chavez Jr. and knocked out former UFC champion Tito Ortiz.

Jake Paul has only fought smaller orthodox opponents, but Silva is a much stronger opponent. As a consequence, he modified his training camp and included a variety of new training partners to assist him in being ready for a new kind of foe.

Paul stated: “It’s always good to have a big challenge because it pushes you to be perfect. There’s no room for lack of motivation or down time or complaining or anything like that. I know that this is a massive opportunity to catapult myself into the history books. To be a legend, you have to beat a legend and that’s what I have the opportunity to do here.”

“So many things are clicking with it being my third year of being a professional boxer. I’ve improved drastically and exponentially. People are going to see a different fighter in the ring. I think people are going to be shocked. It’s been amazing and we’ve really caught a stride and a rhythm with the training camp this year.”